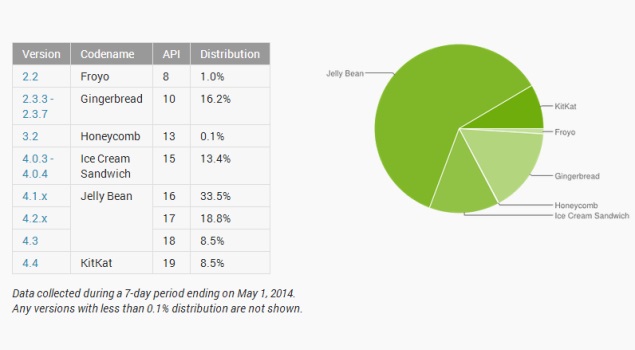 The latest iteration of Google's mobile operating system, Android 4.4 KitKat, continues to climb up the chart, making its presence felt in the monthly OS distribution data provided by Google.

Google, sharing the distribution data of different versions of Android for the month of April, has reported that the most recent version of Android, KitKat or Android 4.4, powered 8.5 percent of all Android devices in the period, while revealing that Android's Jelly Bean still powers the majority of Android devices.

According to the data released on the Android Developers' webpage, Android KitKat gained a total of 7.4 percent from March's 1.1 percent to finish at 8.5 percent this month. Notably, the new version of the Android operating system is limited to some selective devices including the Nexus line of devices; Google Play edition devices; Motorola's Moto G and Moto X; LG's L Series III smartphones; HTC One (M8); Samsung Galaxy S5 and a few other Galaxy devices, as well as some other newly-launched flagship devices.

Android 4.0.x or Ice Cream Sandwich, in Google's April report, registered a share of 13.4 percent, when compared to 14.3 percent in March.

The data collected by Google is during a 7-day period ending on May 1 2014.

The distribution data charts shared by Google are based on the data collected from each device when the user visits Google Play. Google claims this is to make it more accurate and reflect the percentage of users who are actively engaged in the Android and Google Play ecosystem. Prior to this, data was collected when the device simply checked-in to Google servers.