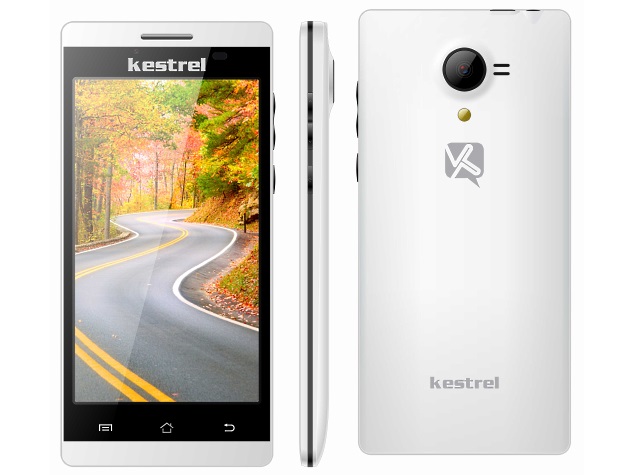 Kestrel, an Indian ICT manufacturer, has launched its first smartphone, the Android-based KM 451, priced at Rs. 6,190. The Kestrel KM 451 is now available to buy via various online e-commerce websites, where it is already listed at significantly lower prices.

The dual-SIM (GSM+GSM) based Kestrel KM 451 smartphone runs Android 4.4 KitKat out-of-the-box, and features a 4.5-inch (480x854 pixels) FWVGA IPS display. The smartphone is powered by a 1GHz dual-core MediaTek (MT6572) processor coupled with 512MB of RAM. The handset comes with 4GB of inbuilt storage, which is further expandable via microSD card (up to 32GB).

The Kestrel KM 451 sports a 5-megapixel rear camera with LED flash, while there is a secondary 0.3-megapixel front-facing camera also onboard. It also features sensors such as accelerometer, ambient light sensor, and proximity sensor.

On the connectivity front, the smartphone offers 3G, GPRS/ EDGE, A-GPS, Wi-Fi 802.11 b/g/n, Micro-USB, and Bluetooth options. The smartphone packs a 1750mAh battery which is rated to deliver up to 8 hours of talk time, and up to 300 hours of standby time. It measures 9.35mm thick and weighs 150 grams.

Commenting on the launch, Pankaj A Sureka, Co-founder and Director, Kestrel Mobiles, said, "Our maiden Smartphone - the Kestrel KM 451 is targeted at users looking for an affordable device along with durability, performance and a long battery life. Additionally our network of 100+ service centres across the country, a complete R&D center in India and in-house testing centre in China."