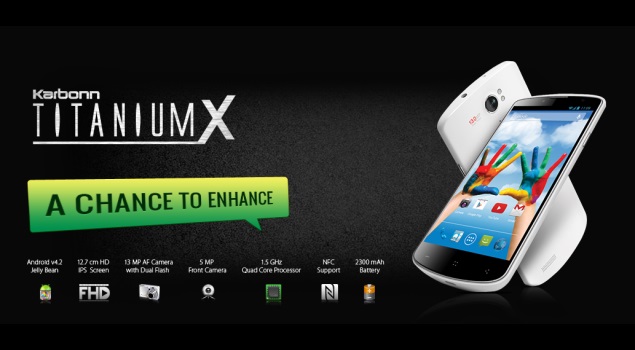 Karbonn has listed its upcoming Titanium X smartphone on the company's site. However, the company has only posted a teaser banner for the smartphone, revealing some of the specifications of the Karbonn Titanium X. Unfortunately, there is no word on the pricing and availability details of the Titanium X, but the smartphone is expected to be released soon in India.

The teaser banner on the company's site includes the smartphone's image accompanied by a tagline, "A chance to enhance." The tech site, Gogi.in spotted the listing first and claims that the smartphone sports a full-HD display with a resolution of 1080x1920 pixels. However, the official site listing does not mention the full-HD display.

As per the listing, the Karbonn Titanium X comes with 5-inch HD IPS display. The smartphone is powered by quad-core 1.5GHz processor (unspecified chipset), however, the report speculates that it might be powered by the popular MediaTek 6589T chipset, which is also seen in the Micromax Canvas Turbo.

Further, the Karbonn Titanium X is listed as running Android 4.2 Jelly Bean out-of-the-box. The smartphone sports a 13-megapixel rear autofocus camera with dual-LED flash and also houses a 5-megapixel front-facing camera. On the connectivity front, the smartphone will include NFC support, which will make the Titanium X the first 'affordable' smartphone from an Indian brand to sport this feature. The smartphone is backed by a 2300mAh battery, however, there is no word on talktime or standby time.

As of now, no details about the Titanium X's RAM, inbuilt storage, expandable storage and dual-SIM support have been revealed by Karbonn.