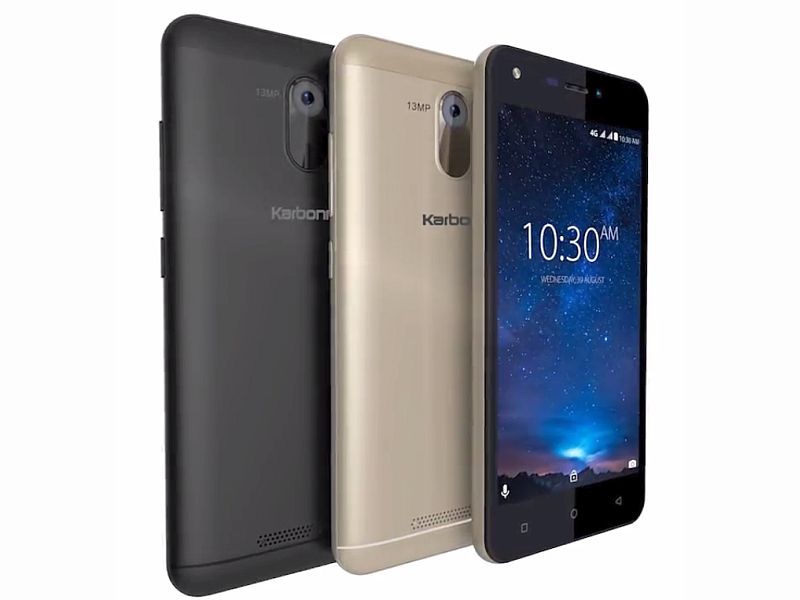 Karbonn has launched a new Titanium-series smartphone, the Titanium Jumbo, in India. The biggest highlight of the smartphone is its massive 4000mAh battery that is claimed to deliver a standby time of up to 400 hours, and talk time of up to 16 hours. Another highlight is the 8-megapixel front-facing camera.

The Karbonn Titanium Jumbo comes at an MRP of Rs. 7,490, though the company clarifies that the MOP (market operating price) will be Rs. 6,490. The company will ship a free back panel cover bundled in the retail box. There's no word whether the handset will be available via online or offline channels. At its price, the Titanium Jumbo will be competing against the likes of Xiaomi Redmi 4, which is almost similarly specced.

For specifications, the Karbonn Titanium Jumbo features a 5-inch HD IPS display and is powered by 1.3GHz quad-core processor. It packs 2GB of RAM and comes with 16GB on-board storage. The storage is expandable via microSD card (up to 64GB). There's 4000mAh battery and the handset supports 4G with VoLTE. It also supports USB OTG. On the camera front, there's a 13-megapixel rear camera with LED flash and also packs an 8-megapixel front camera. The rear camera comes with Panorama shot, continuous shot and face detection features.

The dual-SIM Titanium Jumbo supports 3G, EDGE/ GPRS, GPS/ A-GPS, Bluetooth, and Wi-Fi connectivity options. It will be available in Black and Champagne colours. The company is also marketing preloaded video editor feature on the handset.

Wolfenstein 2: The New Colossus PS4 Day One Patch Is 5.417GB