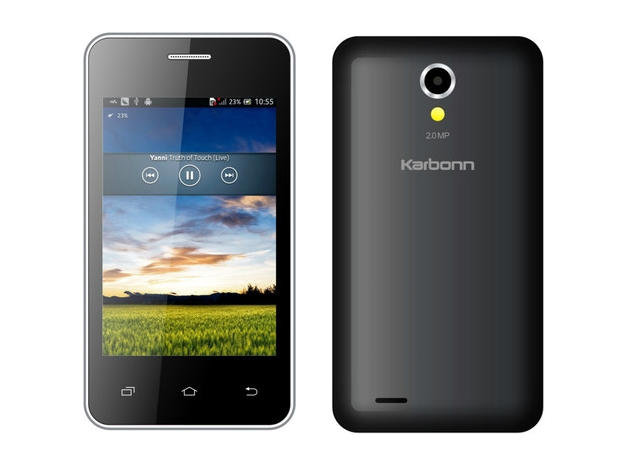 Karbonn seems to be expanding its budget 'A-series' of smartphones, with the introduction of the A50s. The smartphone is now available via an e-commerce website at a price of Rs. 2,790. There is no official word on the launch of the Karbonn A50s yet, however.

The new Karbonn smartphone appears to be the successor to the Karbonn A50, which was launched in July last year. The Karbonn A50s runs the now-dated Android 4.2 Jelly Bean out-of-the-box. It offers dual-SIM (GSM+GSM) support with dual standby. It features a 3.5-inch TFT LCD display with HVGA (320x480 pixels) resolution.

A dual-core MediaTek processor (unspecified chipset) powers the smartphone, clocked at 1.2GHz, coupled with 256MB of RAM. The Karbonn A50s sports a 2-megapixel rear camera with LED flash, while there is a 0.3-megapixel front-facing camera also onboard.

The Karbonn A50s comes with 512MB of in-built storage, and can be expanded up to 32GB via microSD card. It supports Bluetooth, Wi-Fi, GPS/ A-GPS, GPRS/ EDGE and Micro-USB connectivity options. It's worth noting that the Karbonn A50s does not support 3G connectivity.

It is backed by an 1100mAh battery and measures 115.7x61.8x10.5mm. The Karbonn A50s is available in Black and White colour variants, and is listed on Flipkart.

Earlier in May, Karbonn Titanium Hexa went on sale exclusively on Amazon India at Rs. 16,990.

The Titanium Hexa runs Android 4.4 KitKat, one of the highlights of the device, and is the first hexa-core smartphone in Karbonn's line-up. The Karbonn Titanium Hexa features a 5.5-inch full-HD (1080x1920 pixel) LTPS display, and is powered by a 1.5GHz hexa-core MediaTek MT6591 processor that is coupled with 2GB of RAM.