Karbonn A36, A6+, Titanium S5i smartphones launched in 'Kochadaiiyaan' series 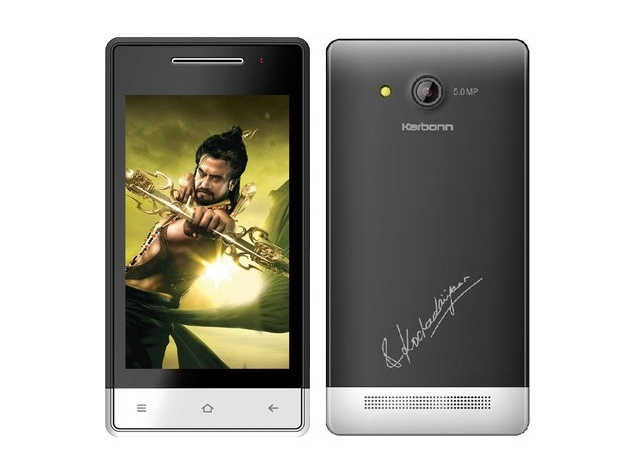 Karbonn has announced three new Android-based smartphone series dubbed as 'Karbonn Kochadaiiyaan Signature Phone Series' focussing on Rajnikanth, a popular south Indian actor, and his upcoming movie Kochadaiiyaan. Two features phones in the same Rajnikanth-inspired series were also announced. All five phones feature Rajnikanth's signature on their back covers, and will be available in limited quantities in the market, once they are launched on March 9.

All five phones for now aren't listed on the company's official site, however, and none of the devices have yet been given pricing by the company. Pricing will be given around the March launch date. The smartphones included in the Karbonn Kochadaiiyaan Signature Phone Series are Karbonn A36, Karbonn A6+ and Karbonn Titanium S5i, along with the two feature phones, dubbed Karbonn Legend 2.8 and Legend 2.4.

The Karbonn A36  is a dual-SIM handset and runs on Android 4.0 Ice Cream Sandwich. The handset houses a 5-inch qHD (540x960 pixel) IPS LCD capacitive touch screen display. The handset is powered by a SC6825 dual-core processor (clock speed unspecified) that's paired with 512MB of RAM. The optics include a 2-megapixel rear camera with flash, and 0.3-megapixel front-facing camera. The Karbonn A36 comes with 4GB of inbuilt memory with an expansion option up to 32GB. The connectivity options for the smartphone includes Bluetooth, Wi-Fi, FM radio and USB. The handset misses out on 3G support. The smartphone is powered by an 1800mAh Li-ion battery.

The Karbonn A6+ smartphone runs on Android 2.3 Gingerbread. The handset features 4-inch WVGA (480x800 pixel) IPS display and packs in a WVGA (480 x 800 pixels) resolution. Karbonn A6+ is powered by an unspecified 1GHz processor along with 512MB of RAM. Also onboard, is a 2-megapixel rear (with LED flash) and a VGA front-facing camera is supported by the handset. The Karbonn A6+ bears 4GB of inbuilt storage, and comes with microSD card support up to 32GB. The device also comes with Wi-Fi, WAP and Bluetooth connectivity, with no support for 3G. The A6+ is backed up by a 1400mAh battery capacity.

The Karbonn Titanium S5i, which was spotted online last month, offers dual-SIM (2G+3G) support, and runs Android 4.2 Jelly Bean. The new Android smartphone from Karbonn comes with a 5-inch display with a FWVGA (480x854 pixel) resolution. The smartphone is powered by a 1GHz dual-core processor with 512MB of RAM. The smartphone sports an 5-megapixel autofocus rear camera with LED flash and also houses a 0.3-megapixel front-facing camera.

The Titanium S5i handset comes with 4GB of inbuilt storage, and can be expanded up to 32GB via microSD card. The Karbonn Titanium S5i supports 3G, Wi-Fi, Bluetooth, Micro-USB, and GPS connectivity options. It is backed by a 2000mAh battery.

The Karbonn Legend 2.8 features a 2.8-inch TFT screen with 240x320 pixel resolution. The camera options for the Legend 2.8 include a 1.3-megapixel shooter (with LED) with no front-facing shooter. While there is no word on the internal storage, the feature phone can additionally support 16GB of external storage. The handset is backed by a 1800mAh Li-ion battery.

The Karbonn Legend 2.4 is a dual-SIM supporting handset and features a 2.4-inch QVGA (240x320 pixel) resolution display. The handset is powered by a MediaTek processor (MTK6260A) paired with 64MB of RAM. The optics for the Legend 2.4 includes a 0.3-megapixel rear shooter, which features a flash. The feature phone has low storage of 64MB, with no word on its expandability via microSD card. Backed by a 1100mAh battery, the handset can offer up to 6 hours of talk time and 300 hours of standby time.

The firm, besides these five handsets, will also be releasing a 4GB microSD card which includes an exclusive Kochadaiiyaan content along with some other movies and songs.

Apple India offers up to Rs. 40,000 buy back discount on purchase of new laptops
Vodafone and ICICI Bank launch M-Pesa service in Odisha