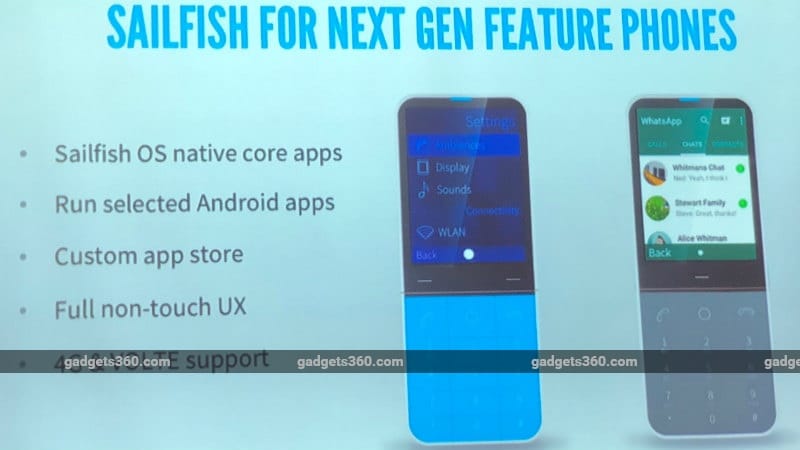 While some Android flagships already grabbed eyeballs at Mobile World Congress (MWC) 2018 in Barcelona, Jolla has now brought Sailfish 3 as the third version of its mobile platform that it touts as the world's only alternative mobile operating system. The new operating system is - instead of focusing on smartphones - targeted at feature phones. Jolla during its press conference at the MWC also announced Sailfish OS support for new devices, including the Sony Xperia XA2, Gemini PDA, INOI T8, and INOI T10.

Jolla says that it has extended security features and options within Sailfish 3 OS to make it a "solid option" for various corporate solutions. The new mobile operating system also gets full support from the company for regional infrastructures, including steady releases and OS upgrades, services to establish independent R&D centres, local hosting, training, and a flexible feature set. However, for a mass audience, the OS is claimed to have the capabilities to support low-specification hardware configurations and run select Android apps. It also has VoLTE support to enable a high-speed connectivity experience on future 4G feature phones. "What sets Sailfish OS apart from its competitors in the feature phone segment is the capability to do low-spec hardware configurations and still run selected Android apps thanks to our unique solution," said Sami Pienimaki, CEO of Jolla.

The feature list of Sailfish 3 is likely to emerge ahead of its rollout that will begin in the third quarter of this year. Meanwhile, Jolla revealed that it will extend the downloadable version of its Sailfish OS for the Xperia XA2 via the Sony Open Device Program. The Finnish company also showcased its Sailfish OS on Planet Computers' crowdfunded Gemini PDA, which includes a physical keyboard and is touted to be a next-generation mobile PDA. A similar experience also announced for INOI T8 and INOI T10 tablets that come in 8-inch and 10-inch display sizes and are targeted to corporate customers in Russia.

In 2016, Jolla partnered with Indian vendor Intex Technologies and demonstrated the Intex Aqua Fish with Sailfish 2.0 at MWC Shanghai. The smartphone was aimed to sit against affordable Android smartphones in India.

Samsung Launches 3-Stack ISOCELL Fast 2L3 CMOS Image Sensor, Seen on the Galaxy S9
Russian Spies Hacked the Olympics and Tried to Make It Look Like North Korea Did It, US Officials Say