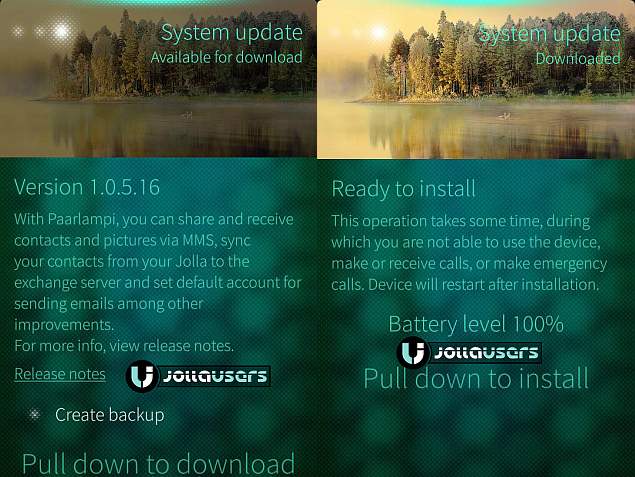 Jolla, a company formed by a group of ex-Nokia engineers and one of the newest smartphone makers in the market, has released an update for its Sailfish OS.

The update, bringing the Sailfish OS to version 1.05.16 (Update 5), is also codenamed Paarlampi. It brings new functionality to the OS, and fixes bugs.

Most notably, with Sailfish OS 1.05.16 (Update 5), Jolla smartphone users can enjoy two-way sync of Exchange contacts. Users will also be able to set a default account for sending emails. Also notably, the update gives the Jolla smartphone support for Multimedia Messaging (MMS) with ability to receive carrier access point settings (MMS settings) directly from the network service provider via over the air - allowing users to share pictures, contacts and other media.

With the update, the Jolla smartphone camera app now has the ability to store EXIF (exchangeable image file format) data in the photos it captures. Additionally users can also save GPS coordinates in the captured images (geotagging).

The Paarlampi update's Android runtime is being upgraded with the OS update, which Jolla says will give users proper update support for their installed Android apps. It also supports sending SMS via Android apps and brings improved 2D/3D performance.

The remaining bug fixes include an important security fix for the recently discovered OpenSSL Heartbleed bug.

Jolla was founded by Nokia's former MeeGo software team that was shut down after the company decided to switch to Microsoft's Windows Phone software in 2011. It had first introduced the Jolla smartphone via a Kickstarter-like 'Movement' in May, in which people could participate by pre-ordering the phone.

Notably the Jolla smartphone's Sailfish OS is based on MeeGo software and is also compatible with Android's application and hardware.