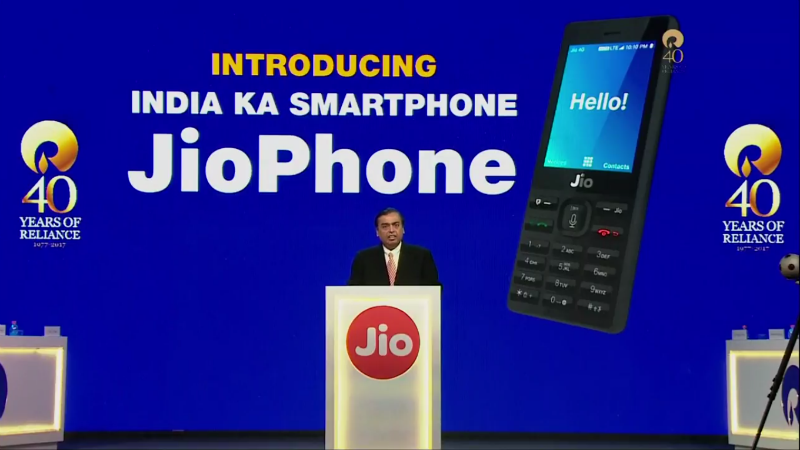 Ambani has thanked Jio employees and customers to conclude the keynote.

Ambani is now talking about Jio Fiber, the fixed line broadband program for the company. He says its a part of the company's plans and he will apprise shareholders of all updates in the future.

The company wants to make the 2G feature phone obsolete.

We are targeting to have 5 million Jio Phone units every week, Ambani says.

It's not clear whether you have to return the phone to Jio after three years to get this refund.

So that's the catch.

You have to pay a Rs. 1,500 deposit, which is refundable according to Reliance Jio. They will return this money after three years, the company claims.

He said the phone is effectively free.

Looks like you're paying only for the data, and the phone itself is free.

Jio Phone will be available for en effective price of Rs. 0, or free!

One more thing... price of the JioPhone.

Ambani is now going over all the things announced today. We expect them to reveal the price of the JioPhone after this.

There are small recharge packs as well, including Rs. 24 for two days and Rs. 54 per week.

Now all Jio phone users can enjoy viewing content from JioPhone screen to the big screen, he says.

Jio has a new Rs. 309 per month plan for those who want to mirror content from JioPhone screen to the big screen - such as a TV.

I am putting an end to unaffordable data for all Indians forever, he says.

JioPhone users will get unlimited data and free voice calls and text messages at Rs. 153 per month.

Starting 15 August this year, Ambani says he is declaring digital freedom for all feature phone users.

On the JioPhone voice will always be free, Ambani says.

Mukesh Ambani is now back on stage to talk about the JioPhone.

Later this year JioPhone will get an NFC upgrade. It will get automatic software upgrades and support tap-and-pay via NFC.

It appears that the JioPhone comes preloaded with the Namo app and can play Prime Minister Narendra Modi's Mann Ki Baat radio programme too.

It also sends your location coordinates in the distress message, according to Jio's demo.

Any JioPhone can long-press the 5 key and the phone will automatically send a distress message to your near and dear ones, the company claims.

The JioPhone has a powerful speakerphone, the company claims.

It even understands Hindi voice commands, they just asked the phone to play Vande Mataram in Hindi.

It even answers questions such as When is Ganesh Chaturthi? Apps like Jio Music, JioCinema, are pre-loaded.

The demo on stage shows the phone accepting voice commands such as Message Akash I can't take your call right now.

The JioPhone is a 4G LTE phone and it supports 22 languages. It even has a microSD card slot.

The JioPhone looks like a feature phone with a 9-button numeric keypad. It has FM radio.

Jio is going to reinvent a feature phone with a revolutionary device that is made in India for all Indians, he says.

I had challenged our engineers at Jio to find a disruptive solution, he says.

Even an entry level smartphone costs between Rs. 3,000 and Rs. 4,500, making it unaffordable for a feature phone user to upgrade, he says.

It is both unjust and ironic that 50 crore Indians with feature phones spend more on voice calls and SMS than their smartphone counterparts, he says.

To support the enhanced coverage we are expanding our physical distribution network in India, he says. By September the company will have over 10,000 offices and 10 lakh outlets across India.

It took 25 years for our competitors to build their 2G network. Jio will have created a larger 4G network in just 3 years.

Because of Jio India's 4G coverage will be more than its 2G coverage, he says.

In the next 12 months, Jio will cover 99 percent of our country's population, Ambani claims.

For the past five months, the Trai speedtest portal has consistently ranked Jio as the clear 4G network leader in coverage, usage and data speeds, he says.

They can neither afford the cheapest 4G smartphone nor the exorbitant cost of data charged by 2G operators, he says.

There are 78 crore mobile phones in India. More than 50 crore feature phone users who have been left out of the digital revolution, he says.

Jio is a customer-obsessed organisation, he claims.

Most of them have recharged on Rs. 309 or higher plans.

Starting March 2017, Jio successfully undertook the largest migration from free to paid users. We have converted our free customers to paid customers, with over 100 million paying users, he says.

I believe that India is well on its way to becoming #1 in mobile broad penetration in the coming months, he says.

Before Jio's launch, India was 155th in the world in mobile broadband penetration. Now India is #1 in mobile data consumption, Ambani claims.

India has overtaken the US and China in mobile data usage, Ambani claims.

Jio users are consuming over 125 gigabits of data every month. This includes 165 crore hours of video every month, he adds.

Many analysts believed that India can never be the largest data market in the world, he says. Again Jio proved them wrong. In just 6 months since Jio's launch, data usage went from 20 crore gigabits to 120 crore gigabits in India, he says.

Before the launch of Jio, sceptics said VoLTE is a globally unproven technology. But we proved them wrong.

I sincerely thank each and every one of our customers

This was the fastest adoption of any technology service anywhere in the world, faster than even Facebook, WhatsApp, and Skype, he says.

In less than 170 days more than 100 million customers signed up for Jio. Jio added 7 customers per second every single day.

Nobody believed that we could customers as fast, he says. The company has invested 2 lakh crore in its network. They over delivered on the 100 million target I had set for them, he says.

It's been only 10 months since the launch of Jio, Ambani says. It has broken one world record after another, he says.

Ambani just thanked his parents for the company's success. His mother Mrs. Kokilaben Ambani is at the venue too.

Ambani just rattled off a bunch of numbers about how much the company's shares have grown over 40 years.

This year marks the 40th anniversary of our IPO, Mukesh Ambani says.

The keynote has just begun, as Mukesh Ambani takes the stage.

Reliance Jio is expected to launch a phone. We'll have live updates as soon as the event begins. Stay tuned.

The event is being held in Mumbai.

Reliance AGM is scheduled to begin at 11 am.

At the Reliance AGM in Mumbai, the focus was on the Jio phone, which had been in the rumour mill for a long time. The new JioPhone comes with a number of features not seen in feature phones in the market so far, such as support for 'smart' apps, voice recognition, provision for digital payments, and most importantly 4G VoLTE support. In fact, as a 4G-capable feature phone, the JioPhone could potentially have an even bigger impact on India’s mobile and telecom landscape than Mukesh Ambani's telecom venture did.

Mukesh Ambani started the Jio-centric announcements by reiterating the record-breaking journey of the company, which he claimed acquired 7 customers per second, and now has 125 million users as of now. He spoke about Jio users consuming 125GB of data every month, which includes 165 crore hours of high-speed video every month, adding that India has overtaken the US and China in data consumption to take the pole position. Extolling the achievements of the company, Mukesh Ambani added of the 76 crore mobile phone users in India, over 50 crore have been left out of the digital revolution because of feature phones. Jio will improve its 4G-only network over the next year so that it outstrips the 2G network in the country, and will set up 10,000 Jio offices across the country. On top, the company has launched its long-rumoured 4G-capable JioPhone

Reliance Jio’s two big selling points have been free voice calls and affordable 4G data, though the two features may have appealed to different audiences. While smartphone users love that data is now cheaper than before, feature phone users love the fact they don’t need to pay for calls and SMS, which obviously tend to be their major use case. The Lyf-JioPhone will aim to marry the two worlds, by offering 4G Internet and other features at a price that is expected to appeal to a wide audience. Lyf is Reliance Retail’s brand under the group has launched multiple Android smartphones till date.

JioPhone buyers will get an alphanumeric keypad, 2.4-inch display with QVGA display, SD card slot, torchlight, FM radio. It will come with a digital voice assistant, support for 22 Indian languages, and a panic button.

As for specifications, the phone is expected to come with dual SIM functionality, 2-megapixel rear camera, VGA front camera, FM radio, and Bluetooth connectivity. The JioPhone has been tipped to come with a 4GB of internal storage, and 512MB of RAM. The mobile will have the ability to install and run apps, including Jio’s own apps like JioTV, JioCinema, and others. The JioPhone will be able to connect to any TV using a cable developed by the company to show content from JioTV and JioCinema apps to watch the content on the big screen.

There is a new Rs. 153 Jio plan for JioPhone buyers, which will come with unlimited data - i.e. without caps; however the high-speed data is limited to 500MB. Those planning to buy the plan and the cable can opt for both together at Rs. 309. There will also be Rs. 24 Jio sachet with 2-day validity, and Rs. 54 recharge with 7-day validity.

The JioPhone is "effectively free," announced Mukesh Ambani. However, the company will charge Rs. 1,500 as a refundable sum for the device from users. This sum can be claimed back by the customer at the end of 36 months of purchase.

JioPhone release date has been set as August 15, but as a beta test; public availability will be from September. Pre-booking starts on August 24, and deliveries will be on first come, first serve basis. Users can book the phone from Jio offline stores and MyJio app. The handset will be manufactured in India starting the last quarter of the year.

The Jio broadband service once again got a mention at the Reliance AGM, but Mukesh Ambani did not dish out any details. He, however, did say Jio remains on track to bring world-class optic fibre connectivity, and is the next big monetisation opportunity.

Reliance Jio vs Airtel: Airtel Says It Is Bleeding Rs. 550 Crore per Quarter Thanks to Jio
Nokia 2 Budget Android Smartphone Leaked in Image Comparing It With Nokia 3