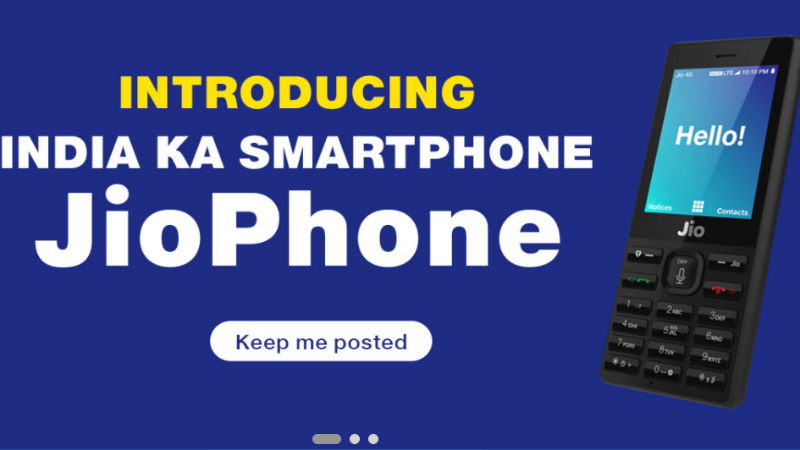 Jio Phone pre-bookings have finally started but it seems not many people are able to book the handset right now. This would come as a disappointment to the millions of consumers who were looking forward to getting their hands on the Jio-branded 4G feature phone since it became official on July 21. The Jio.com website is slow to respond even an hour and a half after the Jio Phone pre-bookings officially started, and the MyJio app - the only avenue to make the booking online apart from official site - is not allowing consumers to order the handset. This will be a hiccup for the company that reportedly aims to sell 20 crore units of the handset over the next two years.

The Jio Phone pre-bookings were scheduled to start Thursday at 5:30pm IST, with the company finally revealing the specifications and features of the handset on the dedicated page on the website. Some consumers are reporting they still cannot see the Prebook Now button on the MyJio app after opening it, while others who did get to open the prebooking interface ended up on a blank page. The Gadgets 360 team - after several attempts - was able to make it to the next page, and was able to enter the phone number and pincode of delivery area. However, when tapping on the Pay button, we received the error messages such as Connection Refused, server is not started or has refused the connection, and Our systems aren't responding. Please try again after sometime.

How to book Jio Phone?

To pre-book JioPhone using the MyJio app, just open the app and tap on the Prebook Now option. Next, provide your phone number and the pincode of the area you live in, and tap on Proceed. That’s it, you will get a booking ID on the app as well as SMS, which you can refer to while picking it up from the designated retailer. To book a unit for a friend or family member, simply input their phone number and delivery pincode and make the payment. In this case, the SMS will be sent to you as well as your friend’s mobile number, with the address of the retailer and booking ID.

The phone is free to buy but you will have to make a Rs. 1,500 refundable security deposit “to avoid potential misuse.” Gadgets 360 understands the payment will be made in two parts – Rs. 500 is to be paid when you make the booking, while the remaining Rs. 1,000 needs to be paid while picking up the handset.

Delivery dates for JioPhone will depend upon how early you book the device, as Reliance Jio is following the first-come, first-serve rule. So if you want to be among the first to get your hands on the device, make sure to be ready with the details when pre-orders open at 5:30pm on Wednesday. The company aims to deliver 5 million units of the handset each week, but the demand expected to be high so there is no surety on when the deliveries would be made.