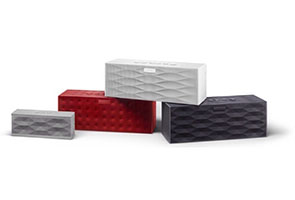 Highlights
Jawbone began rolling out an even louder version of its portable wireless speakers, which have caught fire among smartphone and tablet users.

The Big Jambox speakers could be pre-ordered online at jawbone.com for $299 ahead of their release in stores on May 15. They will roll out in other countries in the coming months.

Jambox has been catching on in Australia, Brazil, Europe, Japan, and elsewhere, with smartphone and tablet adoption evidently driving sales of the easy-to-carry wireless speakers engineered for rich sound.

"With Big Jambox we utilized state-of-the-art audio technology to fill a much larger space with amazing sound without sacrificing portability."

The original Jambox is credited with starting a wireless speaker trend with a sleek, pocket-sized sound system that synchs to gadgets using Bluetooth capabilities.

Big Jambox amplifies the technology in the original Jambox, which is about a third of the size of its newly-unveiled sibling and boasts being the top-selling wireless speaker in the United States.

"The world is changing as a result of the smartphone," Jawbone vice president of product management Travis Bogard said as he gave AFP an advance listen to Big Jambox.

"Digital downloads and streaming services are putting the world's content right in our hands," he added, gesturing from his iPhone to his iPad. Big Jambox can connect wirelessly to two gadgets at once.

Google, Apple, Microsoft and an array of startups offering services that let users store films, music, and more in the Internet "cloud" should enhance the allure of adding rich sound to content streamed to gadgets.

"So many of us are using smartphones and tablets," Bogard said. "And streaming services and cloud data storage are a reality... It is all coming together at the right time."

Bogard switched on Live Audio 3-D sound technology as he streamed "Money" by Pink Floyd to a Big Jambox, and one could almost count the change during the classic opening of the song.

"It's almost like going back and listening to everything in headphones," Bogard said of the musical nuances.

Big Jambox will follow its sibling when it comes to software that can be updated at jawbone.com to enhance device features.

"I think we are really creating a new paradigm; living around the smartphone or tablet," Bogard said. "We think it should be a human-centric experience."