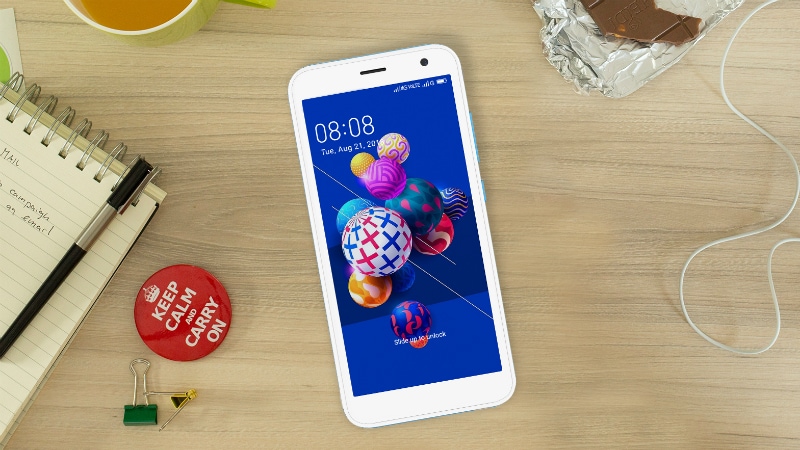 iVoomi iPro was launched in India on Thursday. The new smartphone by Hong Kong-based features a FullView display along with an 18:9 aspect ratio and runs Android 8.1 Oreo (Go edition). The smartphone is also touted to have shatterproof glass protection and features such as Time-Lapse and AR Emoji. Further, there is a six-level Face Beauty Mode and Mirrored Selfie feature. The iVoomi iPro comes with 4G VoLTE support and has a software-backed facial recognition support to enable the preloaded Face Unlock functionality. The Chinese company has also provided a battery-saving feature that it calls an Intelligent Power Saving Mode. The iVoomi iPro comes three months after the company launched the iVoomi i2 Lite with a dual rear camera setup with a price tag of Rs. 6,499. The company also recently launched its Innelo brand and brought the Innelo 1 smartphone earlier this week.

The iVoomi iPro price in India has been set at Rs. 3,999. The smartphone is exclusively available for purchase through Flipkart and comes in Platinum Gold, Indie Blue, and Matte Red colour options. iVoomi has partnered with Reliance Jio to offer the 'Jio Football Offer' along with the iVoomi iPro. Customers are entitled to receive a cashback worth Rs. 2,200 by recharging their Jio connections with Rs. 198 or Rs. 299 prepaid pack.

The dual-SIM (Nano) iVoomi iPro runs Android 8.1 Oreo (Go edition) on top of iVoomi's proprietary Smart Me OS 3.0 and features a 4.95-inch FWVGA+ (480x960 pixels) FullView display along with an 18:9 aspect ratio. The display panel is protected by a glass panel that the company claims as shatterproof. Under the hood, there is a 1.3GHz quad-core MediaTek MT6737 SoC, coupled with 1GB of RAM. The smartphone based on Google's Android Go programme has a 5-megapixel camera sensor at the back along with an LED flash. On the front, there is a 5-megapixel camera that supports a Face Unlock feature. There are also features such as Time-Lapse and AR Emoji.

For storing content, the iVoomi iPro has 8GB of onboard storage that is expandable via microSD card (up to 128GB). The smartphone has 4G VoLTE, Wi-Fi, Bluetooth, GPS/ A-GPS, Micro-USB along with USB OTG support, and a 3.5mm headphone jack. Sensors on board include a gravity sensor and a proximity sensor. Besides, the smartphone packs a 2,000mAh battery and measures 140x66x10mm.

"iVoomi iPro has been designed keeping in mind the aspirations of a typical smartphone buyer in India who wants to own the best of technology without burning a hole in his pocket," said Ashwin Bhandari, CEO, iVoomi India, in a press statement while announcing the new launch. "This includes users who are switching from feature phones to smartphones but have a budget constraint. Bringing the latest technology at the most competitive prices has been the core vision of the company. With this, we also decided to bring back our much-adored Shatterproof Display coupled with the in-demand AR Emoji."