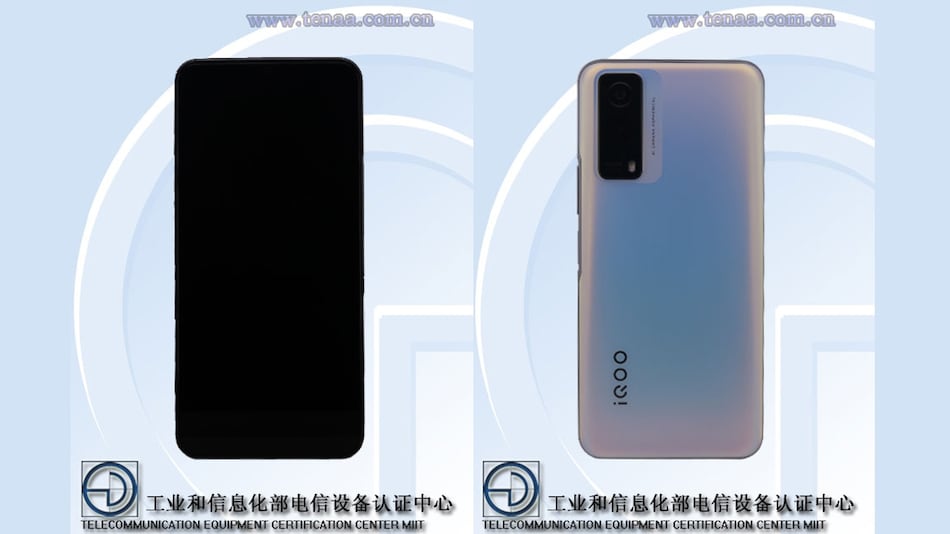 iQoo Z5x images have also been shared by TENAA listing

iQoo Z5x has allegedly been spotted on the TENAA certification website, offering a glimpse into its key specifications and images. The rumoured smartphone is expected to sport a 6.58-inch TFT screen, as per the listing, with other details such as camera specifications listed. The smartphone has reportedly also been spotted on the Geekbench listing with MediaTek Dimensity 900 5G SoC. Both the listings also suggest that the phone runs on Android 11 out-of-the-box. Previously, the phone's alleged 3C certification listing showed 5G and fast charging support. Additionally, it has been listed on JD.com for pre-bookings.

As per a TENAA listing, a smartphone with model number V2131A, believed to be of the iQoo Z5x, has a 6.58-inch TFT display. In the camera department, the iQoo smartphone can be seen with two rear cameras with 50-megapixel primary and 2-megapixel secondary sensor. On the front is an 8-megapixel camera. The iQoo V2131A runs Android 11, measures 163.95x75.30x8.5 mm, and weighs 169 grams, as per the listing.

The reported iQoo Z5x TENAA listing also suggests that the smartphone is powered by a 2.4GHz octa-core SoC. It could come with 6GB and 8GB RAM variants paired with 128GB and 256GB storage editions. There is a 4,880mAh battery. The alleged Geekbench listing, seen by 91Mobiles, also shows a phone with model number V2131A with 6GB of RAM. It says the phone is powered by the MediaTek MT6877V/ZA chip, which is the MediaTek Dimensity 900 5G SoC.

As mentioned, the iQoo Z5x was reportedly seen on 3C website revealing that the smartphone in question will be a 5G device with fast charging support. The handset is also listed on JD.com for reservations. It was also seen on Google Play Console.