iQoo 3 5G flagship phone is tipped to launch in India later this month. 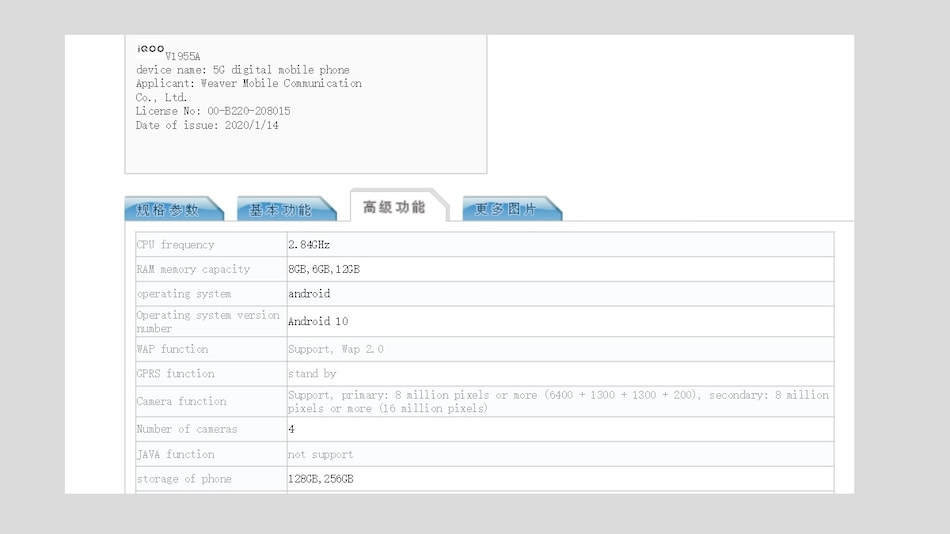 iQoo 3 will pack a 4,370mAh battery with support for 55W charging

iQoo, Chinese smartphone maker Vivo's sub-brand that specialises in making gaming-centric phones, recently announced plans to launch a 5G flagship phone in India as an independent brand - confirmed to feature the Qualcomm Snapdragon 865 SoC. The phone was recently spotted on the 3C database, carrying the model number V1955A and 55W charging support in tow. Heavily rumoured to debut as the iQoo 3, the phone has now received the TENAA certification in China, revealing some of its key specifications in the process. The iQoo 3 will pack a quad rear camera setup that includes a 64-megapixel main snapper and a 16-megapixel front camera.

The iQoo 3's TENAA listing says that the upcoming flagship phone, which is set to have its global launch in India, will pack a 6.44-inch full-HD+ (1080 x 2400 pixels) AMOLED display. It will be supported by a 4,370mAh battery, and as per the 3C listing, will offer 55W fast charging support. It will draw power from an octa-core processor clocked at 2.84GHz, which is most likely the Snapdragon 865 SoC, since 2.84GHz is the frequency listed on the chipset's official product listing on Qualcomm's website. Also, the iQoo 3 is going to be a 5G flagship phone, so the Snapdragon 865 SoC is a no-brainer here.

The top-of-the-line Qualcomm SoC will be paired with 6GB, 8GB, or 12GB of RAM, and 128GB or 256GB of internal storage based on the configuration. Talking about the cameras, the iQoo 3 is said to pack a quad rear camera setup that goes like this - 64-megapixel + 13-megapixel + 13-megapixel + 2- megapixel. While the role of each sensor is not revealed, we expect it to include a regular RGB snapper, a wide-angle lens, a macro shooter, and a depth sensor or a telephoto lens. On the front sits a 16-megapixel shooter for selfies and video calls.

The iQoo 3's TENAA listing says the phone will tip the scales at 214.5 grams, while its dimensions are 158.51 x 74.88 x 9.16mm. There is only a single black colour listed on the Chinese certification authority's database, but we expect more colour options to be revealed at the phone's launch. Unfortunately, the iQoo 3 aka V1955A's TENAA listing has not been updated with its images yet. However, the phone recently popped up in a pair of alleged live images, revealing a flat panel with a hole-punch and an in-display fingerprint sensor. While a launch date is yet to be announced, it will likely debut in India later this month.

Tata Sky Discontinues Its SD Set-Top Box, Offers HD Option as Minimum for New Customers
Netflix Finally Lets You Turn Off Autoplay Previews: Here’s How to Do It