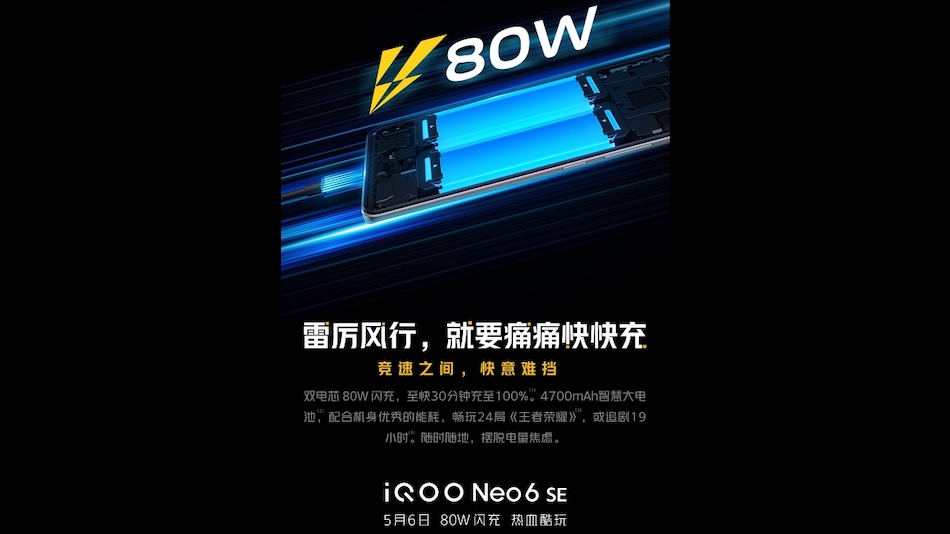 iQoo Neo 6 SE battery capacity information is now official. The smartphone will come with a 4,700mAh battery, the Vivo sub-brand announced via a post on Weibo. The development comes a day after iQoo announced that the phone will be launched in China at an event scheduled on May 6 at 7:30pm CST (5pm IST). It also announced that the phone will come with a Qualcomm Snapdragon 870 SoC. The Chinese brand says that the smartphone has undergone 11 rounds of performance tuning.

As per a post on Weibo by iQoo, the iQoo Neo 6 SE will pack a 4,700mAh battery which will come with support for 80W fast charging. The company claims that the battery can be fully charged in 30 minutes. The company has already announced that the smartphone will launch in China on May 6. Till now, it has been confirmed that the iQoo Neo 6 SE will be powered by a Qualcomm Snapdragon 870 SoC clocked at 3.2GHz. The phone is also said to come with at least one variant that will pack 256GB of UFS 3.1 storage.

iQoo is expected to reveal more iQoo Neo 6 SE specifications in the run-up to the phone's launch.

Recently, tipster Digital Chat Station suggested that the iQoo Neo 6 SE will feature a 6.62-inch full-HD+ OLED display with 120Hz refresh rate. The phone is tipped to be a watered-down version of the iQoo Neo 6, which sports a 6.62-inch full-HD+ AMOLED display with an under-display fingerprint sensor. The iQoo Neo 6 is powered by a Snapdragon 8 Gen 1 SoC, which is paired with up to 12GB of LPDDR5 RAM and up to 256GB of UFS 3.1 storage. The phone also packs a 4,700mAh battery that supports 80W Flash Charge.

Bethesda Launcher to Steam Migration Announced Ahead of May 11 Shutdown