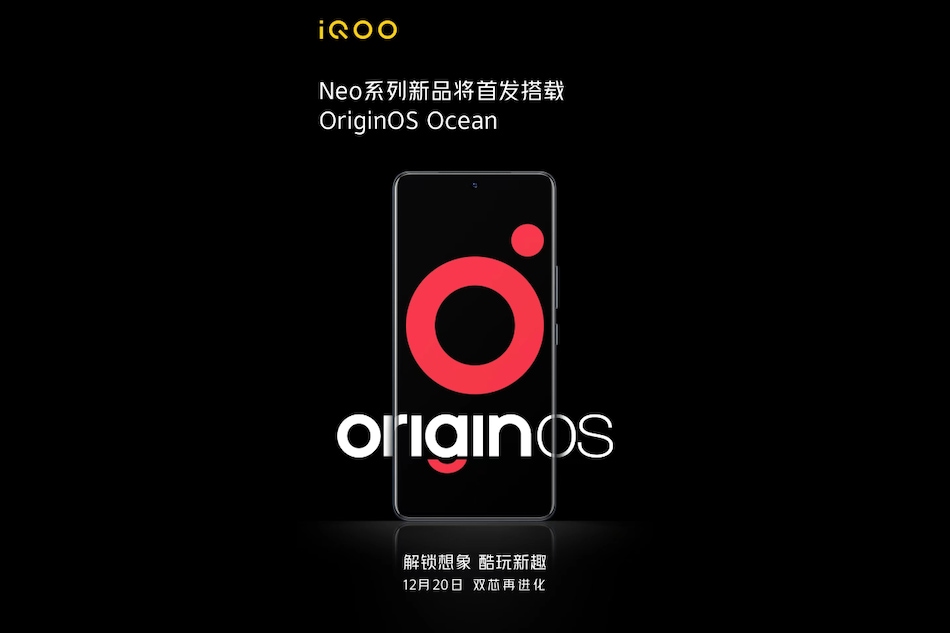 iQoo Neo series is getting an update on December 20, the Vivo-subsidiary has announced on Weibo. Although the company has not yet revealed the exact models, iQoo Neo 5s is expected to be one of the smartphones in the upcoming series. The phone is rumoured to have a Qualcomm Snapdragon 888 SoC and an AMOLED display with a hole-punch design. In addition to the Neo 5s, the company may unveil the iQoo Neo 5 SE as another model in the Neo series. iQoo has also confirmed that the new models in the iQoo Neo series will run the latest OriginOS out-of-the-box.

Through a teaser posted on Weibo, iQoo has announced the launch date of its new Neo series in China. The company has not yet revealed the devices that will be a part of the new series, though the teaser has confirmed the presence of OriginOS Ocean UI. The custom skin was recently launched as an upgrade to Vivo's original OriginOS.

On the devices part, the iQoo Neo 5s is expected to be one of the models coming under the new series. The smartphone purportedly appeared on Weibo earlier this week, featuring a hole-punch display design. It is also rumoured to get Snapdragon 888 SoC, along with 8GB of RAM and 128GB of onboard storage. Some previous reports suggest that the iQoo Neo 5s may come with an AMOLED display with a 120Hz refresh rate and include a 4,500mAh battery with 66W fast charging support.

The iQoo phone is also rumoured to have a triple rear camera setup that would include a 48-megapixel Sony IMX598 primary sensor. Further, rumours suggest it could come with a 16-megapixel selfie camera sensor at the front.

Alongside the Neo 5s, iQoo may be in plans to launch the iQoo Neo 5 SE at its December 20 event. The smartphone is speculated to have the MediaTek Dimensity 1200 SoC and 66W fast charging support.