iQoo’s new 5G phone will have a small bezel at the bottom. 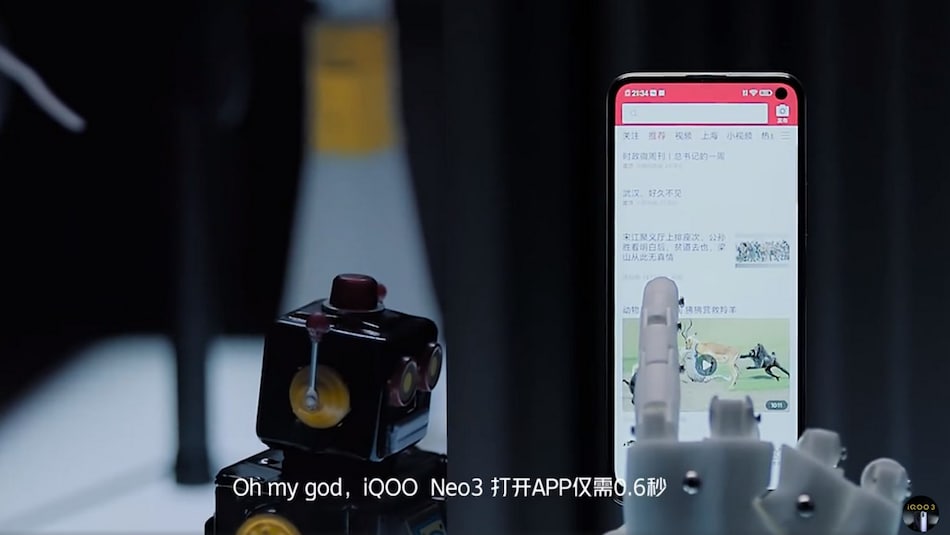 Vivo has released a new teaser video for iQoo Neo 3 and it has revealed the front design of the phone. iQoo Neo 3 can be seen featuring a hole-punch display. The screen will have the hole-punch near its top-right corner. The company has already confirmed that its upcoming smartphone will be powered by Qualcomm Snapdragon 865 processor. The display of iQoo Neo 3, that has been seen in the teaser video, will come with a 144Hz refresh rate.

iQoo shared the 34-second long teaser video on Chinese social media service Weibo, revealing the looks of the forthcoming smartphone. A screengrab of the video at 00:24 suggests that the smartphone not only has a hole-punch display, but will also come with slight bezel at the bottom.

The price of the smartphone has also been tipped through a separate post on Weibo. The price of iQoo Neo 3 is said to begin at CNY 2,998 (roughly Rs. 32,500). At this price, it will become the most affordable Snapdragon 865-powered smartphone in the world, cheaper than the Redmi K30 Pro by CNY 1.

The company has already announced that iQoo Neo 3 will be launched on April 23. iQoo has also disclosed that the phone will have a display with a 144Hz refresh rate. iQoo Neo 3 will also come with UFS 3.1 storage. The phone will support 5G connectivity. There is no word so far on the India launch of the phone. To recall, iQoo 3 5G was launched in India for Rs. 44,990.

Previously, iQoo Neo 3 5G was claimed in a report to feature a 48-megapixel main rear camera. It has also been tipped that the phone may come with a 4G variant apart from the 5G one.