iQOO 3 Neo 5G is rumoured to include a 48-megapixel main rear camera. 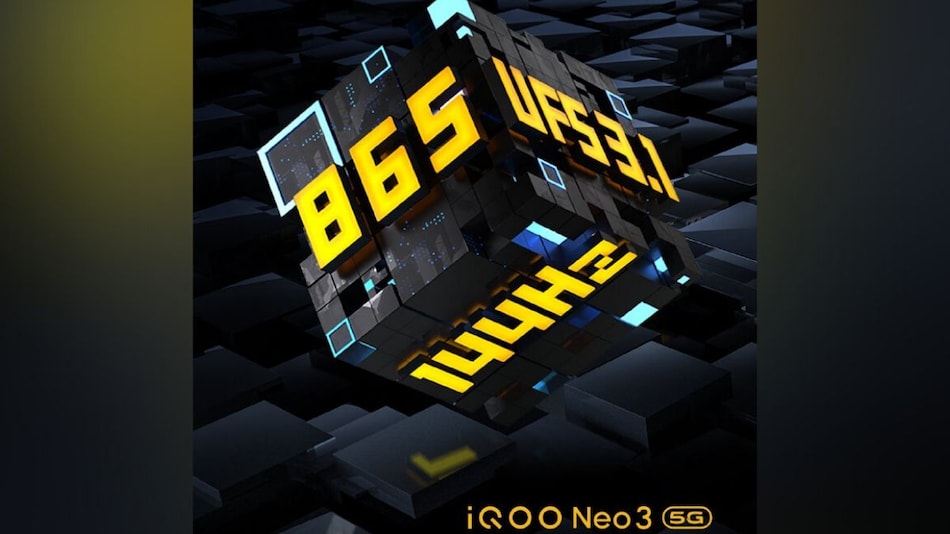 iQoo Neo 3 5G smartphone will officially debut on April 23, the company today announced on Chinese social media website, Weibo. iQoo in the post also highlighted that the smartphone will pack Qualcomm Snapdragon 865 SoC, support 5G, and have UFS 3.1 storage - just like the iQoo 3 smartphones launched in February this year. However, unlike the older phones from the company, the new iQoo Neo 3 5G is confirmed to come with a 144Hz display. At the moment the Chinese tech company has not confirmed the launch of their next smartphone in India. To recall, iQoo 3's 5G variant was launched in the country for Rs. 44,990.

The new announcement on Weibo comes days after iQoo confirmed that the company has incorporated a new 3 + 2 strategy for its upcoming iQoo phone. Although it was not made clear at the time what '3 + 2' meant, a tipster had claimed that the '3' denotes the smartphone's processor, display refresh rate, and storage - which is now confirmed. Meanwhile, it was also added that the '2' stood for a 4,500mAh battery with 44W fast charging option which is yet to be announced by iQoo. To recall, the launch date had been tipped last week.

Moreover, another report had claimed that the iQoo Neo 3 5G will include a 48-megapixel main rear camera similar to what is seen in iQoo 3 phones launched in February. It is also likely that iQoo Neo 3 5G may also include a 4G variant.

Though the iQoo Neo 3 5G is going to be the next phone in iQoo's Neo lineup, the new naming scheme indicates that the company is positioning the Neo 3 5G alongside the iQoo 3. To recall, the last iQoo Neo phone was the iQoo Neo 855 launched last year.

Meanwhile, Vivo has also launched a microsite for iQoo Neo 3 5G and we can expect to see more updates on the same in the coming days.