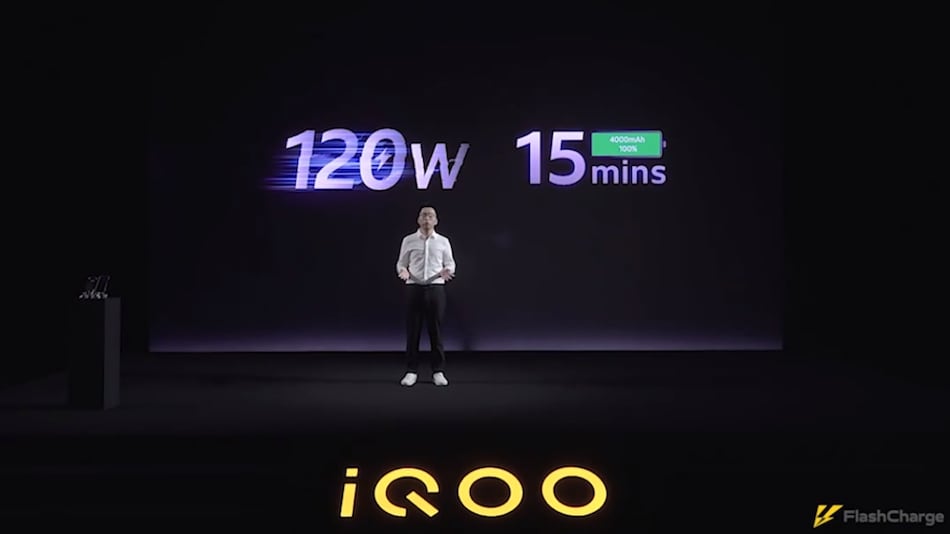 iQoo unveiled its 120W ultra-fast charging technology today as per a report. The new offering is believed to be able to fully charge a 4,000mAh battery within just 15 minutes. The Vivo sub-brand, who already has a slew of fast charging options to choose from, first introduced the 120W technology at the 2019 Mobile World Congress in Shanghai, China. It seems that fast chargers are on everyone's radar, as rival brand Oppo also announced the launch of its 125W fast charging technology, expected on July 15 and Realme is also tipped to be working on its 100W+ charger, which it reportedly plans to launch this month.

According to a Gizmochina report, the brand said that its 120W technology can charge 50 percent of a 4,000mAh battery in five minutes and a full recharge can be achieved in just 15 minutes. iQoo already has several fast charging solutions on offer, including the 33W, 44W and 55W technology seen in its smartphones.

Last year, iQoo first talked about the 120W fast charging technology at the Mobile World Congress conference. Since the technology is not yet under mass production, the report also suggests that iQoo might be the first brand in the world to officially announce the same.

Leakster Digital Chat Station took to Weibo to reveal that an iQoo phone with the 120W fast charging technology may be unveiled in August. The device may come with super VC liquid cooling technology to maintain an optimal internal temperature.

Last month, it was tipped that the iQoo 3 Pro phone is in the works, which features a 4,500mAh battery, a 6.56-inch screen and fast charging technology. Whether this new phone would feature the 120W charging technology is yet to be confirmed by the Chinese brand.

On the other hand, Oppo announced that it will be launching its 125W fast charging technology on July 15. In another leak, Realme was revealed to be working on a 100W+ fast charging tech. Believed to be called Ultra Dart fast charging, speculations suggest that it can charge up one-third of a 4,000mAh+ battery in just three minutes. The tip also suggests that the tech could see a launch later this month.