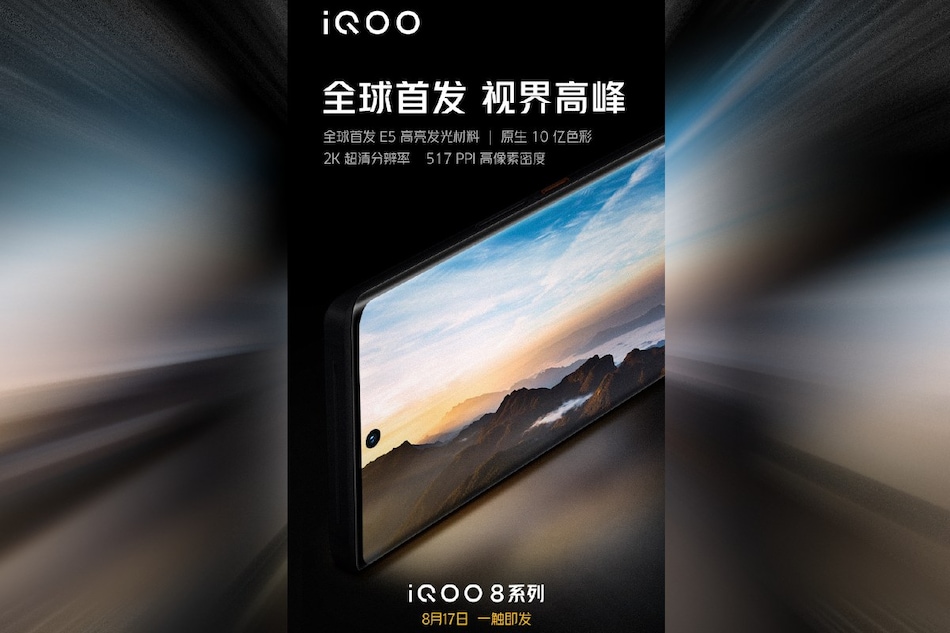 iQoo 8 will also come with a hole-punch display design, the teaser has shown

iQoo 8 will feature Samsung's E5 display with 2K resolution, the Chinese company revealed through a teaser posted on Weibo on Wednesday. The flagship is claimed to be the world's first smartphone to come with the next-generation Samsung display. Last month, the rumour mill suggested the presence of a 2K AMOLED display on the iQoo 8. The smartphone is also speculated to have a 120Hz variable refresh rate. The iQoo 8 will debut as the successor to the iQoo 7 that was launched in January.

The E5 display on the iQoo 8 will have 517ppi of pixel density and will produce up to a billion colours, iQoo highlighted in the teaser that also give us a glimpse of the phone from its top side. The teaser image also clearly shows a hole-punch display design on the new smartphone.

Samsung brought its E4 AMOLED display in the past that was used in various high-end smartphones including the Asus ZenFone 8, Black Shark 4, Mi 11 Ultra, Mi 11i, and the Realme GT Master Edition. However, Vivo sibling iQoo seems to be taking on the existing top-end models by bringing the iQoo 8 with the next-generation E5 display.

The new display is likely to deliver an upgraded user experience over the iQoo 7 that came with a 6.62-inch full-HD+ (1,080x2,400 pixels) AMOLED display.

Apart from the new display, the iQoo 8 is rumoured to come with a Qualcomm Snapdragon 888+ SoC, along with 12GB of RAM and 256GB of onboard storage. The smartphone is also said to run on OriginOS 1.0 based on Android 11.

That said, the iQoo 8 launch is taking place in China on August 17. However, the company is likely to reveal some key highlights of the smartphone in the coming days.