iQoo 7 BMW Edition will come with BMW M Motorsport tri-colour streaks on the back. 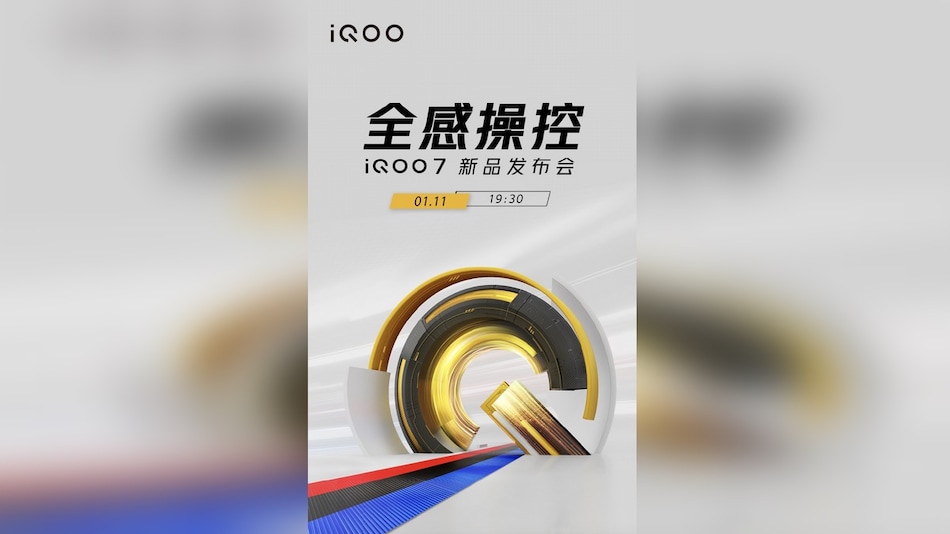 iQoo 7 BMW Edition will launch on January 11 at 7:30pm local time (5pm IST) in China, the company has announced through a post on Chinese microblogging website Weibo. The phone is confirmed to be powered by the Snapdragon 888 SoC. Previous teasers also show that the phone will feature a triple rear camera setup. The iQoo 7 BMW Edition will come with BMW M Motorsport tri-colour streaks on the back that run from top to bottom. The company has also shared fresh details about the phone in a separate post. The iQoo 7 BMW Edition is a variant of the iQoo 7, which itself has not yet been launched and is expected to debut alongside.

iQoo took to Weibo to announce they will be unveiling the iQoo 7 BMW Edition on January 11 at 7:30pm local time (5pm IST) in China. The poster shared in the post does not reveal any specifications for the phone. However, a separate post says that the iQoo 7 BMW Edition will be powered by the Snapdragon 888 SoC, have an enhanced version of LPDDR5 RAM, and also an enhanced version of UFS 3.1 storage. The phone will come with 5G support thanks to the latest Qualcomm SoC.

iQoo 7 will be the official gaming machine for the KPL Games (King Pro League) eSports event in China. The KPL eSports event is held in autumn and spring seasons every year in the country.

That's pretty much all that is known about the phone in terms of design and specifications. From the looks of it, its camera module seems to have a design similar to that of the Vivo V20 2021. The three sensors form a triangle with the flash below, and are housed in a rectangle camera module. More information on the iQoo 7 is expected to be revealed as we get closer to the launch on January 11.

Last week, a known tipster on Weibo shared that iQoo plans on releasing three to four new smartphones powered by Snapdragon 888 SoC before the Spring Festival in China that ends on February 12, 2021. But the company hasn't revealed anything more than the launch date of the iQoo 7, which will come with the latest chipset.