iQoo 3 is set to launch in India as well as China on February 25. 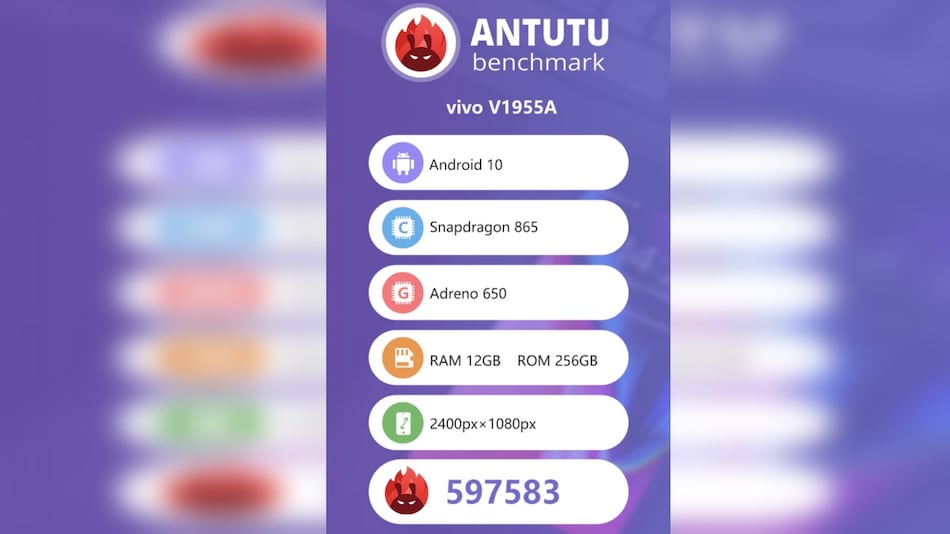 iQoo 3 is tipped to flaunt a hole-punch design

iQoo 3, the upcoming 5G flagship phone from the Vivo offshoot, has been spotted on AnTuTu, and it left quite an impressive trail on the benchmarking platform. The phone put up a tally of 597583, which is the highest score so far recorded on AnTuTu. As per AnTuTu's database, the iQoo 3 is powered by Qualcomm's top-of-the-line Snapdragon 865 SoC ticking alongside 12GB of RAM and 256GB of onboard storage. Additionally, the company has revealed that the iQoo 3 will come equipped with a 4,440mAh battery that will support the in-house 55W Ultra Flash Charge technology.

The iQoo 3, which was spotted on the benchmarking platform carrying the model number V1955A, was recently listed on the TENAA base as well. Aside from putting up the highest benchmarking tally of any Android phone out there, the iQoo 3's AnTuTu visit revealed a few details about its internal hardware as well. The benchmarking screenshot reveals the Snapdragon 865 SoC at the heart of the phone, paired with 12GB of RAM and 256GB of onboard storage.

The AnTuTu listing also divulges the resolution of the iQoo 3's display – 1080 x 2400 pixels – which translates to full-HD+. Moreover, the phone was sighted running Android 10, most likely with a custom skin on top. As per a recent Weibo post by the company, the iQoo 3 will employ the more efficient LPDDR5 RAM modules and the faster UFS 3.1 storage, much like the freshly announced Xiaomi Mi 10 and Mi 10 Pro flagship phones. Other features that have so far been officially revealed for the iQoo 3 include Wi-Fi 6 and dual-band 5G (NSA + SA) support.