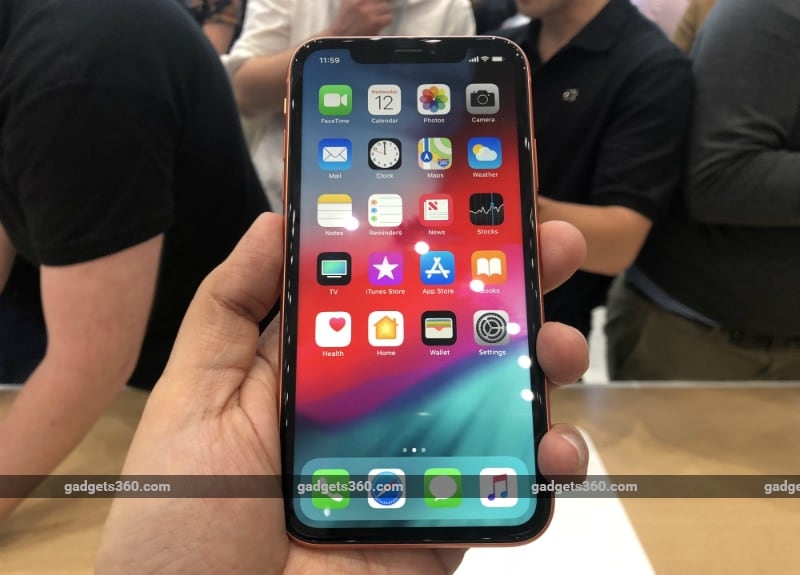 The iPhone XR is now up for pre-orders in India, as announced at its launch event held in Cupertino last month. The smartphone can currently be pre-ordered across Apple's offline resellers in the Indian market, which include Imagine, Unicorn, iWorld, and the likes. The phone can be also be pre-ordered via Airtel, Jio, and Amazon. Touted as the most affordable offering in the iPhone 2018 lineup, the iPhone XR offers an LCD display, a single rear camera, and multiple colour options differentiating it from the flagship iPhone XS and iPhone XS Max. The phone, however, offers similar internals at a significantly lower price point compared to the iPhone XS series.

The iPhone XR pre-bookings listing is now live on IndiaiStore, the official offline partner for Apple in India. Online, the iPhone XR is listed for pre-orders on Amazon, though Flipkart is yet to list it. We can expect that to happen sometime later today. At the time of press, there was a “Coming Soon” banner visible on Flipkart's website.

As for Airtel, the iPhone XR can be booked via the telecom giant from today with down payments starting at Rs. 14,999. Airtel's online store also offers certain bundled offers to help iPhone XR customers avail premium postpaid plans at lower tariffs. As per communication by Airtel, the iPhone XR will be delivered to pre-ordering customers on October 26. We can expect other operators like Jio and Vodafone-Idea to reveal their pre-order details soon.

Jio in the meanwhile also lists the iPhone XR for pre-order, and offers 5 percent cashback for Axis or Citibank credit cards (including EMI transactions), apart from 5X reward points.

iPhone XR price in India has been set at Rs. 76,900 for the 64GB storage variant. The 128GB storage model has been priced at Rs. 81,900, while the top-end 256GB storage variant comes in at Rs. 91,900 in the Indian market. The smartphone will go on sale in India starting October 26, across Apple's offline and online partners in the country. It will be sold in Black, Blue, Coral, PRODUCT (RED), White, and Yellow colour options.

Apart from India, the iPhone XR will go on sale in dozens of countries starting October 26. These include US, UK, Canada, China, Australia, and more. Some reports from last month have suggested that Apple changed suppliers due to manufacturing issues with the iPhone XR.

The dual-SIM iPhone XR runs iOS 12, and sports a 6.1-inch (828x1792 pixels) LCD Liquid Retina display panel with a notch on top that houses the TrueDepth camera and Face ID technology. The phone is powered by Apple's latest six-core A12 Bionic SoC, coupled with a quad-core GPU, 3GB of RAM, and 64GB/ 128GB/ 256GB of inbuilt storage.

In the camera department, the iPhone XR sports a single rear 12-megapixel camera sensor with a 6P lens, f/1.8 aperture, OIS, Focus Pixels, and a quad-LED True Tone flash. On the front, the handset gets a 7-megapixel selfie camera with an improved Portrait mode, f/2.2 aperture, an IR camera, and a diffractive beam splitter. The front camera also houses a faster Face ID system. There is a 2,942mAh battery under the hood, with a bundled 5W adapter in the box. The 3.5mm-to-Lightning dongle will not be included in the box this time.