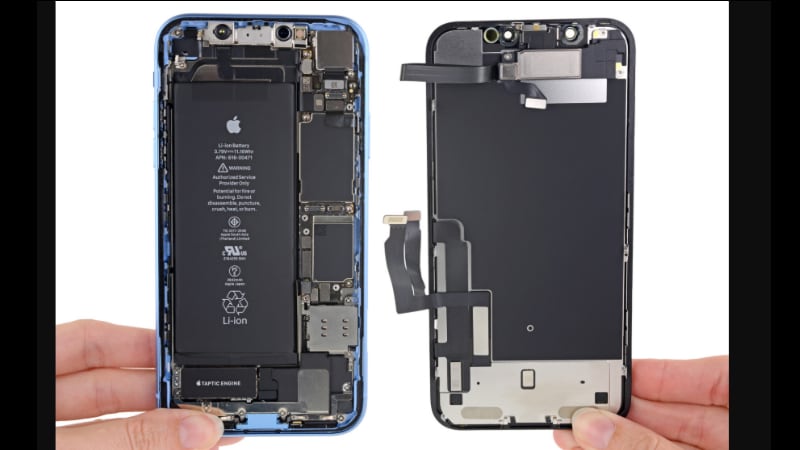 The iPhone XR has gone on sale in many countries, including India, and teardowns have now begun to surface. iFixit is back with its teardown, giving us a repairability score as always, and German YouTuber kaputt.de has also published a teardown video giving us all the details on the tough and easy tasks for repair. The teardowns reveal that Apple's display-first opening procedure remains with iPhone XR, and battery access is rather easy. However, glass on front and back doubles the crackability, and broken back glass requires an entire chassis replacement. The display glass, if broken, is easily replaceable with minimal hardware removal.

The teardowns reveal that the iPhone XR has pentalobe screws, which are rather uncommon, around the charging port. While this enables repairing it from third parties a tough task, it in turn enables easy opening of the device, with the display coming out first. The internals seem to replicate a hybrid between the iPhone 8 and iPhone X with the rectangular battery, and a rectangular logic board. The teardown also reveals the modular SIM card reader, and the logic board, which is also easily removable. It also has a Taptic Engine that supports haptic touch, to make up for the loss of 3D Touch capabilities.

A little bit of adhesive holds the iPhone XR's battery in place, and once that is removed; the battery can be replaced without any damage to the phone. iFixit notes that the battery is a bit smaller than the iPhone 8 Plus, but it is thicker. The only negatives are that waterproofing complicates a few repairs and the glass on the front and back makes it a little vulnerable to crack. Plus, if the glass at the back is broken, the entire chassis will have to be replaced. iFixit has given it a repairability score of 6 out of 10. You can watch the teardown video from kaput.de below.

As for specifications revealed by the teardown, the iPhone XR was found to have 3GB of RAM from Micron, a roughly 2,945mAh battery, storage from Toshiba, and an Intel 9955 modem.