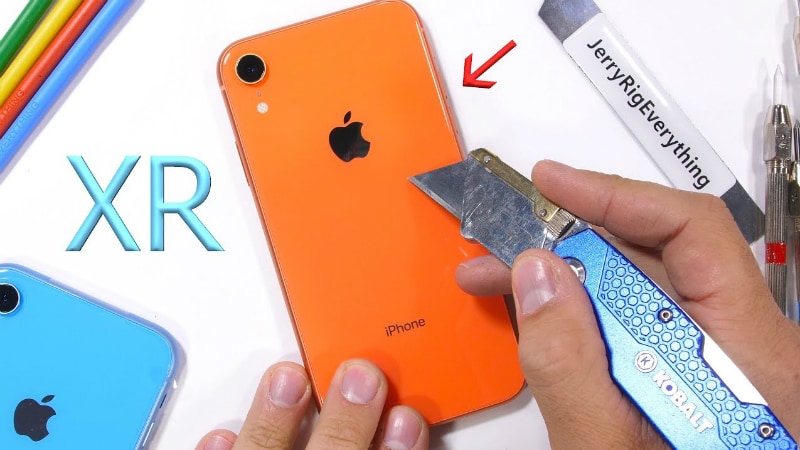 After an announcement at the Cupertino event last month, the iPhone XR was finally made available in India and dozens of other launch countries starting October 26. The most affordable model in the iPhone 2018 was recently put to the durability test by Zack from the famed JerryRigEverything YouTube channel known for running extensive tests to determine how durable some gadgets really are. The display and the camera glass scratched off at the same level, the anodised aluminium frame was praised for being durable, and the LCD display quickly recovered after the burn test. Separately, the iPhone XR was put through a series of drop tests by EverythingApplePro, which found it to be pretty sturdy.

Starting off with his standard scratch test, Zack observed that the iPhone XR is much like any other flagship smartphone in 2018 and starts showing scratches at level 6 with deeper grooves at level 7. Unlike stainless steel used on the expensive iPhone XS and iPhone XS Max, the body of the iPhone XR is made of anodised aluminium and is mostly durable around the ports and physical buttons.

Another interesting takeaway from the durability test is how weak the “sapphire lens” on the rear camera sensor is. Much like the 6.1-inch Liquid Retina display upfront, this glass too starts scratching at level 6 of Moh's hardness test. An actual sapphire lens, used on a Tissot-branded watch, usually shows scratches at level 8.

The IPS LCD panel on the iPhone XR lasted about 10 seconds when exposed to the flame of a lighter as part of the burn test. After the 10-second mark, the exposed part of the display went black but returned to normal within a few seconds of removing the flame. As for the bend test, the iPhone XR's Series 7000 aluminium helped protect it from flexing significantly when pressure was applied.

In conclusion, Zack in his video says, “If Apple charged $500 or even $600 for this hardware, I'd be pretty pumped… The [iPhone] XR is structurally sound even if the sapphire isn't pure and the screen automatically downgrades Instagram and YouTube; it does pass my durability test.”

Popular YouTube creator EverythingApplePro performed his own series of durability tests by comparing the iPhone 8 and iPhone XR depending on how well they sustain drops from different heights. When dropped from waist height, both phones turned out fine without any significant damage. Even when dropped from head height at certain angles, both phones turned out fine with no major deformations or nicks. However, the iPhone 8's display glass shattered when the impact was screen first. The iPhone XR did not take any damage in the same test.

Lastly, the uploader climbed up on a ladder to drop and break the glass on both sides of the iPhone XR, which should not usually be treated as a failure of build quality. The “sapphire lens” on the phone's rear camera however sustained no damage even in this drop. As noted in the durability test, dropping on the back might affect the iPhone XR slightly more considering it has a bigger camera bump when compared to the iPhone 8.