iPhone May Get a Foldable Design, Apple Patent Application Hints 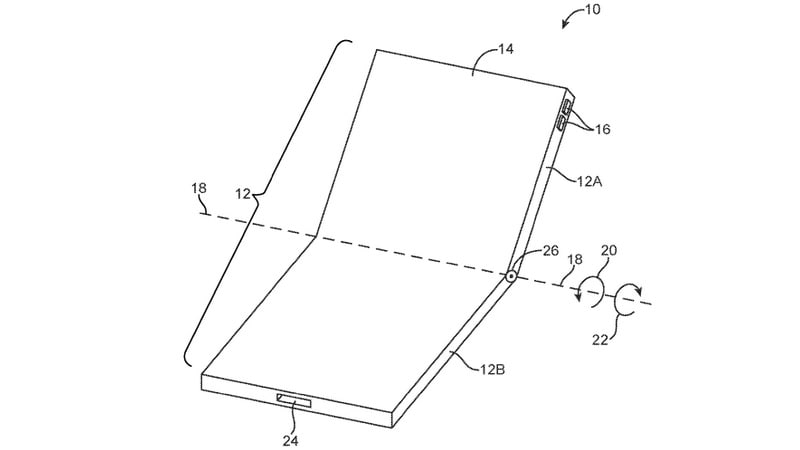 iPhone model may get foldable design, a patent hints

An iPhone with a foldable display may become a reality, if a patent filing is any indication. With Android smartphone makers going all in with the idea of foldable smartphones, it appears that Apple doesn't want to be left behind. A patent application filed by the Cupertino-based iPhone maker suggests that the company might be experimenting with multiple designs for a foldable iPhone. The sketches in the patent application indicate that both inward and outward folding designs might be under consideration by Apple for a possible foldable iPhone. There is also a mention of a double folding smartphone design that will create a triple stacked form factor.

Apple's patent application, that was published on the United States Patent and Trademark Office (USPTO) website recently, is titled “Flexible Display Devices” and serves as a not-so-subtle indication that a foldable iPhone is certainly on Apple's radar. While some of the designs in Apple's patent application point towards a practical device, they are merely concept ideas at this point and should not be taken as the definitive proof of a foldable iPhone being in development.

The first sketch in Apple's patent application shows a foldable design that is quite similar to the rumoured clamshell form factor of Motorola's foldable Razr 2019 smartphone, complete with what appears to be a chin. Another diagram hints at an outward folding design that we've already seen on the Royole FlexPai and might witness it again on the recently leaked foldable smartphone from Vivo's new iQoo sub-brand. There are also diagrams depicting an inward-folding mechanism for a foldable Apple device that might look like Samsung's rumoured foldable smartphone that is set to be launched on February 20, 2019. But Apple's patent application does not show a concept with a cover display, unlike Samsung's offering.

There are also a couple of diagrams that depict a double-folding design with two hinges that will create three layers of the main body. Unlike Xiaomi's foldable smartphone that folds from the sides, Apple's patent describes a device whose sides fold in the opposite direction, hiding a major portion of the display with the inward-folding section. As mentioned above, these are just concepts with and may never move beyond the design table to become actual devices. But with brands like Huawei, Oppo, Nubia, Energizer LG, and Microsoft rumoured to be working on foldable devices, Apple might as well jump the gun and launch its own foldable device.