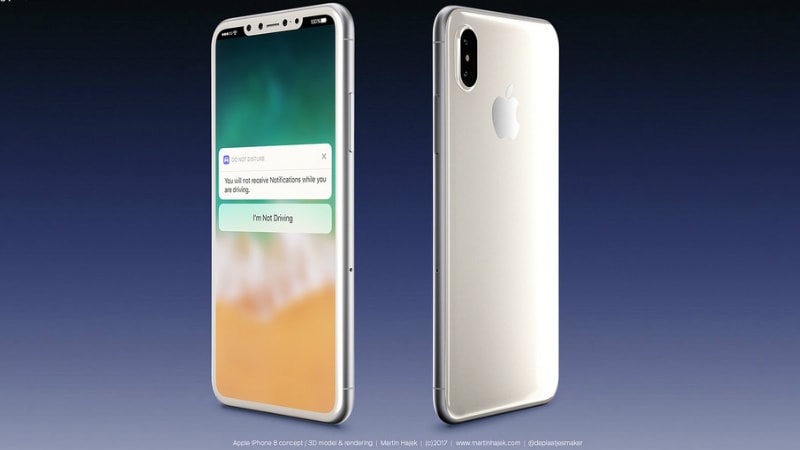 iPhone 8 features, specs, and even renders continue to crop up online in abundance even though we are still months away from the launch. Now, fresh leaks bring more renders, crucial design information from KGI analyst Ming-Chi Kuo, and reported OLED supply measures taken by Apple to secure next year’s demand as well. Another report also claims that Qualcomm’s recently announced in-screen fingerprint technology is not close to shipping - dampening Apple’s plans further.

First up, reliable KGI Securities analyst Ming-Chi Kuo is back with a fresh report talking about the upcoming iPhone lineup. The analyst claims that the iPhone 8 will not support in-screen fingerprint scanning, and that Touch ID will not be embedded under the display. However, he does not clarify on whether the Touch ID sensor will be placed in an alternative location, or won’t be around at all. This refutes previous rumours from the supply chain sources that claim otherwise.

9to5Mac got hold of the report and it even elaborates on features like the 5.8-inch OLED display (5.2-inch usable after removing the function area from below). It sports an almost bezel-less display (barring the top lip), 3D front camera with facial recognition, and elevated sound quality. The analyst also claims that the iPhone 8 will be offered in less colour options than the other iPhone lineup.

Furthermore, Kuo predicts that the iPhone 7s, iPhone 7s Plus, and iPhone 8 will all sport 64GB and 256GB storage options only, and all three will rely on the Lightning port for power although there will be an embedded USB Type-C power deliver circuit for faster charging speeds.

Lastly, KGI claims that the phones will be unveiled in September, but the iPhone 8 will be available much later, with supply constraints going well into 2018. In a separate note, KGI also notes that Qualcomm’s recently demoed in-screen fingerprint scanning is not ready, and won’t be shipped anytime soon, dampening Apple’s plans further.

Also, designer Martin Hajek has released iPhone 8 renders based on dummy units, and his renders corroborate all past leaks. The images show a White and Black variant with the protruding vertical camera setup, and the glass back. The almost bezel-less display is also seen in the photos.

Lastly, a separate report from the Korea Herald claims that Apple is close to striking a deal with LG to make OLED displays for iPhones in the future. The report states that Apple is looking to make an invertment in LG, in exchange for OLED display production for its iPhones. “Apple is reportedly in talks with LG Display to invest about KRW 2 to 3 trillion ($1.75-2.62 billion) into the South Korean display maker’s new OLED production lines exclusively dedicated to Apple orders,” the report says. The iPhone 8 is also tipped to be waterproof, have a fast A11 chip, and sport wireless charging as well.

Xiaomi Redmi 4 to Be Available to Purchase via Amazon India, Mi.com Today