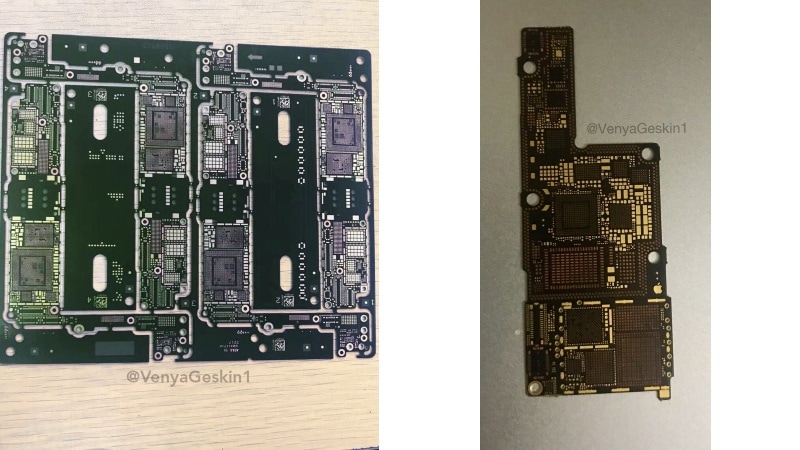 While there have been several leaks claiming that the upcoming generation of iPhones, specifically the iPhone 8, will feature support for wireless charging and glass body, more details have now been leaked. Latest leak suggests that Apple might have opted to use the 7.5W Qi wireless charging standard, which can be considered slower in comparison to the Qi 1.2 standards being used on other flagship smartphones. Separately, the internal components of the upcoming iPhone 7s smartphone have allegedly been leaked in images as well.

Japanese website Macotakara reports that apart from using 7.5W Qi wireless charging, Apple may need MFI licenses for the third-party charging pads, which would effectively mean that the existing Qi charging accessories would be unsupported, as pointed out in a report by 9to5Mac.

Separately, the purported photo of iPhone 8's L-shaped printed circuit board has been leaked by @VenyaGeskin1 aka Benjamin Geskin, and shows that Apple will be packing in more functionality within less space to make room for a bigger battery.

Moving from the internals of the iPhone 8 to the internals of the iPhone 7s, the alleged image of the logic board on the latter has been shared by Benjamin Geskin. Notably, the shared image suggests the same logic board design as seen on past models. Also, the clear shots of the Cupertino-based company's A11 chip can be seen from the images shared on Slash Leaks, as pointed out in a separate report by 9to5Mac. Notably, the Apple A11 chip is expected to feature on both iPhone 8 and iPhone 7s, as pointed out in a report by 9to5Mac.

Apple is expected to launch the next generation of iPhone models on September 12 but the company has not shared any official information regarding the event as of now.

Google Issues Refunds for Ads Only Seen by Robots