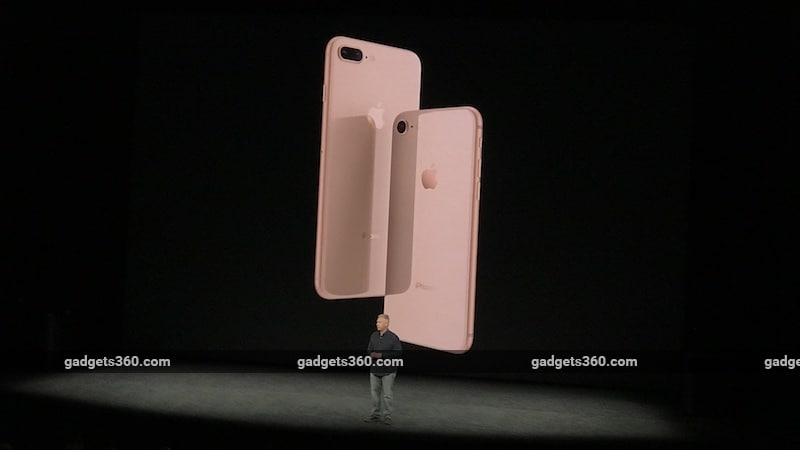 iPhone 8 and iPhone 8 Plus are official now, even though the iPhone X is the new Apple flagship. At the Steve Jobs Theater at Apple Campus on Tuesday, Apple CEO Tim Cook too the covers off the successors to iPhone 7 and iPhone 7 Plus, featuring several new upgrades over last year's models. While the iPhone 8 and iPhone 8 design follow the same design language as their predecessors, they sport a metal and glass bodies and now come in only two storage variants - 64GB and 256GB. They will go up for pre-orders in the US, the UK, China, Australia and 25 other countries on September 15, with shipping slated to begin on September 22. This is about a month before iPhone X goes on pre-orders.

The iPhone 8 and the iPhone 8 Plus offer incremental improvements over the last year's iPhone 7 and iPhone 7 Plus models. They very much retain the same form factor and design, but there are a few noticeable changes including new colour options - Silver, Space Gray, and Gold Finish, improved display, 25 percent louder speakers, as well as glass front and back. Both the new iPhone models also support Qi wireless inductive charging, allowing people charge the iPhone without having to plug in a cable again, Phil Schiller, Apple's Vice President of Worldwide Marketing said.

Apple's iPhone 8 and iPhone 8 Plus are powered by A11 Bionic SoC six-core processors and improved GPU, which is 30 percent more efficient than the GPUs in last year's models. The new SoC and GPU are able to perform complex tasks such as video encoding at much faster rate.

A lot is riding on the success of these iPhone models, especially in the wake of aggressive innovation and progress shown by Android smartphone makers such as Xiaomi and OnePlus. Both the companies are increasingly trickling down iPhone's best selling features to their phones at only a portion of the price. Samsung, too, has improved its software and camera modules significantly over the years.

iPhone 8 and iPhone 8 Plus features include a glass and metal body, dual rear cameras, and A11 Bionic chip

"The iPhone is the most important product Apple creates. It directly represents around two-thirds of Apple's revenue -- the precise amount varies by season. In addition, iPhone technology is widely used in the iPad, Apple Watch and Apple TV, and as Apple sells more iPhones it creates up-sell opportunities. The iPhone is Apple's most visible brand now because iPod sales have declines and the Mac has never enjoyed remotely the same volume," Ian Fogg, an analyst at IHS Markit told Gadgets 360.

Even as Apple executives bolted on stage with much excitement about the company's new products, several analysts and potential buyers of the iPhone expressed little enthusiasm about the announcements, having learned much of the details about the upcoming products over the weekend thanks to a huge leak that appeared to be from within the company. Apple executives on the stage didn't acknowledge the leaks.