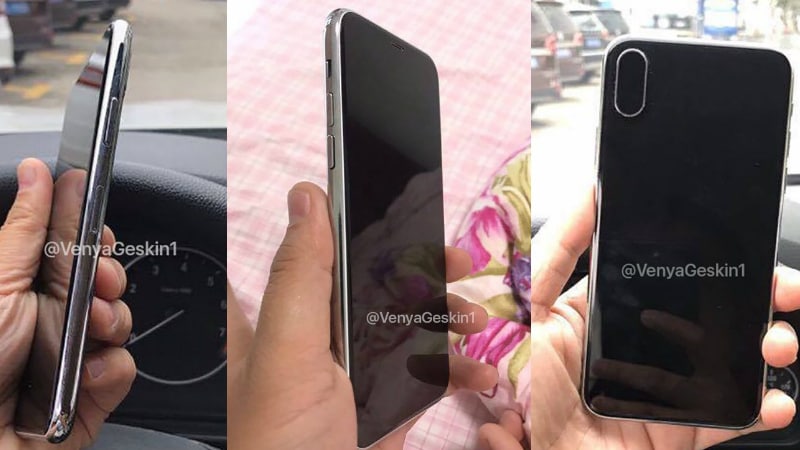 Apple is set to launch an anniversary edition iPhone alongside the iterative updates this September. Tipped to be called iPhone 8 (among other names), the device is said to come with significant upgrades like AR capabilities, fingerprint scanner underneath the near bezel-less display, and more. Fresh image and rear panel leaks hint at design changes and all the other changes that are expected to be incorporated in the iPhone 8.

Few live images of an iPhone 8 dummy model have been leaked by tipster Benjamin Geskin shed light on its design. These images indicate that the iPhone 8 will sport a glass back with 2.5D curved glass and a vertical dual camera setup. The front is also all glass, with no bezel visible. There is also no fingerprint scanner at the back, and no Home Button in the front, indicating that the fingerprint scanner will indeed be embedded underneath the display. The metal edges house the buttons just as they are on current iPhone models, but the power button does seem to be a bit more elongated.

The tipster also states that the iPhone 8 will sport dual front cameras as well - a first for the series if true - and will be 7.1mm thin. Geskin also notes that the camera bump is still visible, and is not flushed as expected. These are CNC dummy models from Foxconn, according to the tipster, and he also leaked schematics based on blueprints, and it shows the amount of area that will be the display in the front, as well as the dual front camera setup.

Separately, an iPhone 8 chassis leak appeared on Weibo, and it reiterates the vertical dual camera setup at the back. Sadly, this leak shows a rear fingerprint sensor below the Apple logo, conflicting with earlier reports. These renders are based on schematic leaks, and it shows the space for volume rocker and mute switch as well. Also, this leak shows a metal casing, while the earlier one had a glass back.

iPhone 8 is expected to sport OLED display which will help in battery saving, and is also tipped to be waterproof and dustproof. The smartphone is also expected to sport some sort of advanced wireless charging capabilities as well.