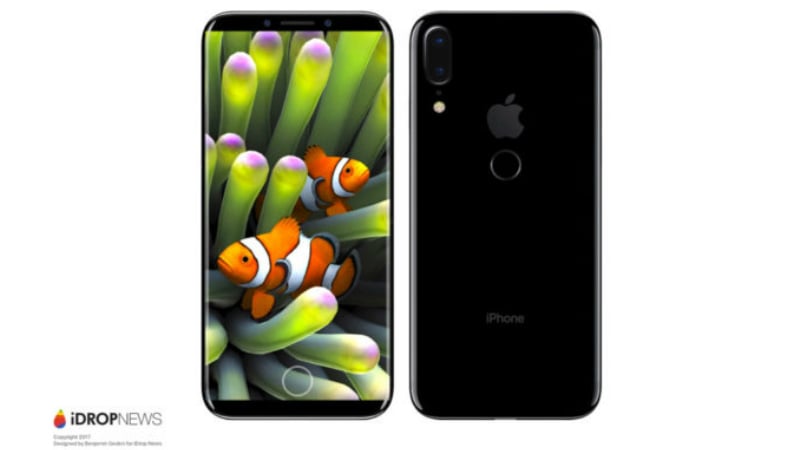 Apple is still a long time away from its iPhone 8 release date, but the leaks continue to pour in almost every day. Today’s leak brings a mockup photo of the iPhone 8 glossy back variant showing the device from the front and back. The image indicates that the iPhone 8 will sport a fingerprint scanner at the back because the screen real estate has been increased and the Home Button has been ditched.

iDrop News shared the mockup photo, created by based on leaked insider information. It shows a front display that looks similar to the Samsung Galaxy S8 launched on Wednesday. The display takes up the large part of the front with slightly curved edges on the left and right side, and thin bezels on top and bottom. The back of the device has some weird design changes like a vertical dual camera setup instead of the horizontal one seen on the iPhone 7 Plus.

The report also calls it the iPhone Edition, something that has been leaked earlier as well. Apple will reportedly take a cue from its Apple Watch series, and call the fanciest iPhone the iPhone Edition. The fingerprint scanner is seen below the Apple logo, and it looks sort misplaced and just not right. We recommend that you take this leak with a heavy pinch of salt, as the source cited is a Foxconn employee, and the mockup photo is based on a prototype. The report also refutes previous rumours of a glass back plate, and says that the iPhone 8 will have a metal one in order to make it more durable and shatterproof. The report also states that the iPhone 8 will sport a slightly-curved 2.5D OLED edge-to-edge display, something that has been leaked extensively.

Also, Apple has been earlier reported to embed the fingerprint sensors underneath the display, and not move it at the back of the device. The iPhone 8 is further expected to sport wireless charging, an improved Siri experience, and the Apple A11 SoC, apart from incorporating augmented reality features.