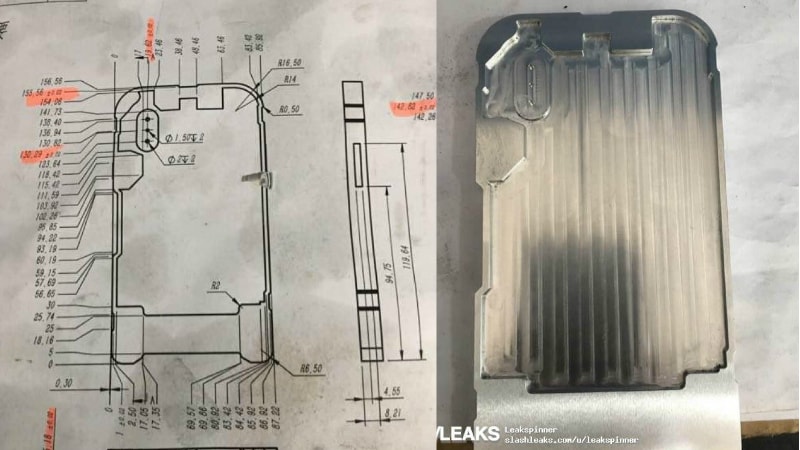 Tipster Benjamin Geskin has been on a roll recently, and has now revealed fresh pictures of the purported mould and schematics of the iPhone 8, tipping design details. The photos tip a vertical dual camera setup, something that has been leaked extensively in the past.

Geskin has tweeted three photos on Twitter (leaked first on SlashLeaks), and the schematic images show the vertical dual camera setup, the power button, and the Lightning port. The moulds show the front and back design on the back, and it lines up with the schematic renders, with a dent for the dual camera setup indicating that it will continue to protrude out of the back. The flash placement seems to be between the two camera sensors as well, something that has been reported earlier as well. Geskin has recently been very active on Twitter leaking iPhone 8 cases, renders, and schematics.

A separate note from Credit Suisse analyst Kulbinder Garcha asks investors to put their money in AAPL shares, as it predicts 'pent up demand' from the next iPhone. "Over the course of the next year, we continue to believe that an iPhone 8 super cycle (starting with three models, one of which will be OLED [display]) should drive up replacement rates and drive new customers. We continue to highlight a degree of pent up demand from iPhone installed base ahead of the major iPhone 8 super cycle as well as continued strong mix shift towards services." Garcha wrote in a note obtained by CNBC.

The iPhone 8 'super cycle' this fall has been predicted by many analysts with the launch of iPhone 8 and Apple's service business as well. iPhone 8 rumours have been aplenty with the smartphone tipped to sport wireless charging, AR features, a front 3D camera, and an OLED display. The device is apparently going through various production issues, and may be delayed in the fall.