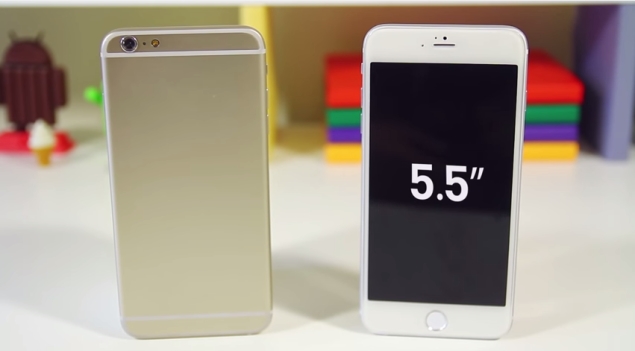 We might see the next iPhone models - Apple has for a while been rumoured to be making 4.7-inch and 5.5-inch variants of the iPhone - being offered in 32GB, 64GB and 128GB storage variants, hinting a new report from China. In the meanwhile, a set of alleged iPhone 6 dummy model videos has made their way to the Web

The move is said to be an attempt of Apple to differentiate the anticipated 5.5-inch iPhone 6 model (phablet) from other phones in the company's line-up. However, there is still no word on whether the smaller 4.7-inch iPhone will offer the minimum 16GB storage. If the 16GB variant is dumped by Apple, then the unannounced 4.7-inch iPhone 6 might be unveiled with just two storage variants - 32GB and 64GB.

On Wednesday, in-line with the current claims, a report indicated that Apple might dump the 16GB storage version for its next generation.

In addition, two new YouTube videos have surfaced on the Internet showing the dummy iPhone 6 - 4.7-inch and 5.5-inch models in full glory. One of the videos purportedly shows the rear panel of both the rumoured iPhone 6 models featuring the Apple logo.

Meanwhile, the other alleged iPhone 6 video shows both the models sporting slim bezels and the home button placed below the display. The smaller 4.7-inch iPhone 6 model appears to include a gold-coloured rim around the home button, similar to the one found on the iPhone 5s (Pictures). The video also compares the bigger alleged iPhone 6 with 5.5-inch display with the LG G3 and the Samsung Galaxy Note 3 (Review | Pictures).

A recent report claimed that Apple's next iPhone would hit shelves on September 19. The Cupertino-based company has been rumoured to be testing a higher screen resolution of 960x1704 pixels on at least one of the two iPhone models likely to debut this year.