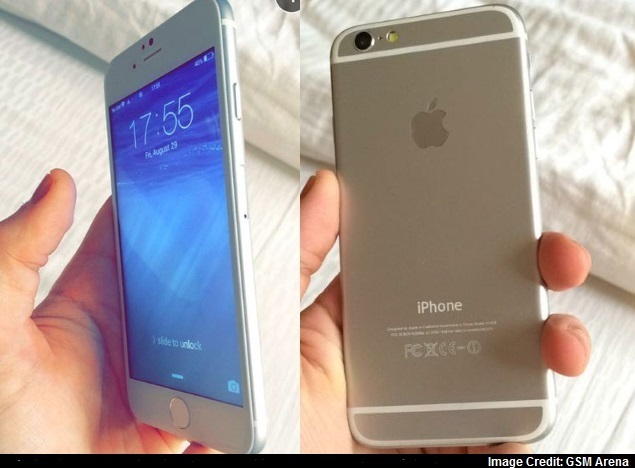 Apple's long-rumoured 4.7-inch iPhone 6 model has been leaked in a couple of fresh images, ahead of the company's expected launch of the device at its September 9 event next week.

The first of the leaked images purportedly shows the iPhone 6's 4.7-inch model with its screen turned on and displaying the iOS 8 lock screen. The other leaked image shows the rear of the handset with camera and LED flash sitting on top of the left edge panel. The leaked image also tips the presence of a protruding camera ring on the model, which goes in-line with some recent leaks.

Reports have been tipping that the protruding camera rings spotted on the iPhone 6 models appear similar to the one seen on fifth-generation iPod touch, although it remains unclear what specific purpose the rings will serve on Apple's upcoming smartphone. The new leaked iPhone 6 images have been obtained by GSM Arena.

The new leaked images of the alleged iPhone 6 4.7-inch model further corroborate what's has been widely expected based on earlier leaks, that the next iPhone will come with curved edges and will be a major departure from the company's current industrial design on existing iPhone models. However, until officially revealed, it remains uncertain if Apple do away with its current straight-edge design seen on the iPhone 4, iPhone 5 and iPhone 5s.

The next iPhone has for a while been rumoured to arrive in two display size variants - 4.7-inch and 5.5-inch - that both feature the iPod touch-inspired design; the Touch ID fingerprint sensor; the new Apple A8 SoC, and the long-awaited NFC connectivity. The new iPhone is also said to cost less than the previous generation, as well as feature higher resolution displays and bigger storage variants (up to 128GB). Of course, the iPhone 6 should ship with iOS 8.

Reports have been tipping that Apple's next iPhone would hit shelves on September 19, the traditional 10 days after the unveiling of the smartphone.