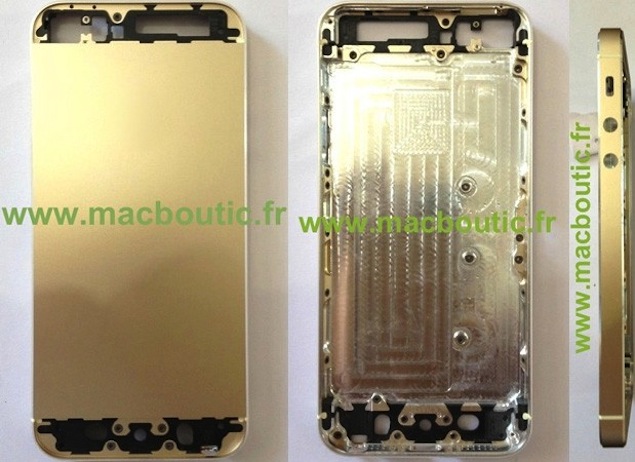 The next-generation iPhone is set to launch on September 10, and the rumours and leaks related to the phone are going into overdrive.

Engadget has shared an image of a purported Gold iPhone 5S that was originally posted by Macboutic.fr. The phone is pictured from various angles and sports a form factor similar to the current generation iPhone. This is in line with what we've heard earlier since the physical dimensions of the next-generation iPhone - expected to be called iPhone 5S - are believed to be identical to the iPhone 5.

Interestingly, the images do not sport any Apple branding, as seen on the back of iPhones and iPads, which the publication notes is a deliberate move. The site has also shared pictures of some of the internal parts of the purported iPhone 5S.

The analyst also predicts that, as expected, the next-generation iPhone will come with a brand new Apple chip, the A7, alongside 1GB of LPDDR3 RAM. According to the Kou, the latest chip is expected to be based on the ARMv8 architecture, and Apple's new design may provide improved efficiencies of up to 20 percent. Kou also believes that iPhone 5S will come with larger f2.0 aperture compared to the iPhone 5, that comes with f2.4 aperture.

The analyst also reiterates that the iPhone 5S will come with a dual LED flash and fingerprint reader.