Apple may offer a slightly distinct notch design on the iPhone 13 Pro Max to retain the TrueDepth camera system in a smaller size. 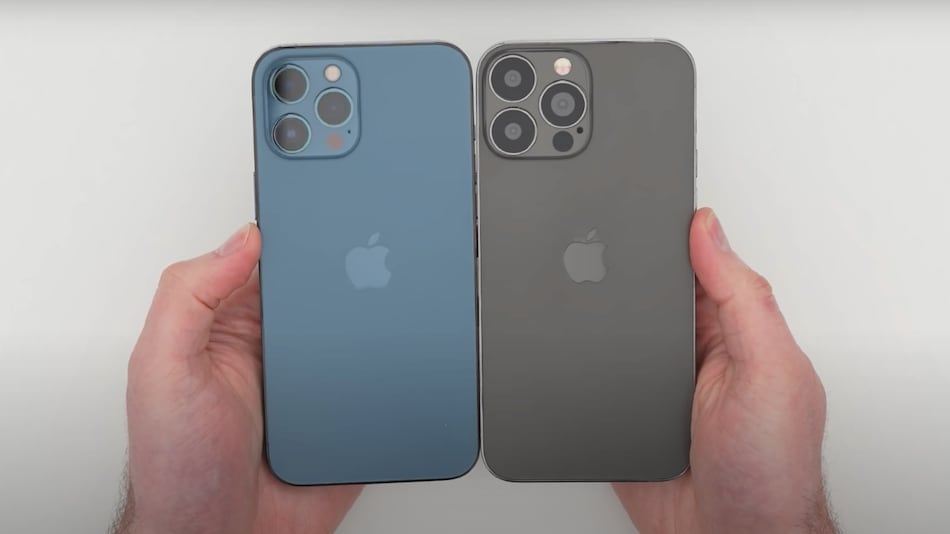 iPhone 13 Pro Max design has been suggested in a hands-on video showing off its purported dummy. The new iPhone model, which is likely to be a part of the company's 2021 iPhone lineup, appears to have a thinner notch over the iPhone 12 Pro Max. The iPhone 13 Pro Max is also rumoured to carry an all-new camera system at the back, with bigger sensors. The rumour mill has also suggested that the iPhone 13 Pro Max would come with a 120Hz display. However, this isn't something that can be judged from the dummy video.

YouTube channel Unbox Therapy has posted a hands-on video showing the purported dummy of the iPhone 13 Pro Max. The dummy is claimed to be sourced from China, and it suggests a substantial increase in the size of the camera modules when comparing with those of the iPhone 12 Pro Max. However, the sensor count remains the same, which is three in both cases — along with a separate LiDAR sensor and an LED flash module.

The iPhone 13 Pro Max may also include the upgraded notch that could be smaller in size, as suggested in the video. The dummy hints that apart from the size, the notch on the new iPhone model could carry the earpiece on the top. This is unlike the existing iPhone models where the earpiece is available in the centre of the notch. The change in the position of the earpiece might be to make room for the TrueDepth camera system despite offering the thinner notch design.

Apple is also likely to provide some slight colour changes on the iPhone 13 Pro Max over the iPhone 12 family. The dummy shows the iPhone in a Graphite colour, but it's not identical to the same hue available on last year's iPhone model. There is a darker shade at the back, while the antennas are lighter over those featured on the iPhone 12 Pro Max.

The iPhone 13 Pro Max is also suggested to have slight differences over the iPhone 12 Pro Max when it comes to its dimensions. There could be a slightly thicker design, as appeared on the dummy.

Unlike the existing iPhone models, the iPhone 13 Pro Max is rumoured to have Touch ID support — in addition to Face ID. The dummy appeared in the video, however, doesn't confirm whether Apple would go with an in-display fingerprint technology or offer its Touch ID technology embedded within the power button.

The over 13 minutes video also doesn't provide any concrete details about the 120Hz LTPO display experience that is rumoured to be available at least on the iPhone 13 Pro and iPhone 13 Pro Max.