iPhone 12 Pro Max, iPhone 12 mini show no signs of damage even after being exposed to a small flame from a lighter for 50 seconds. 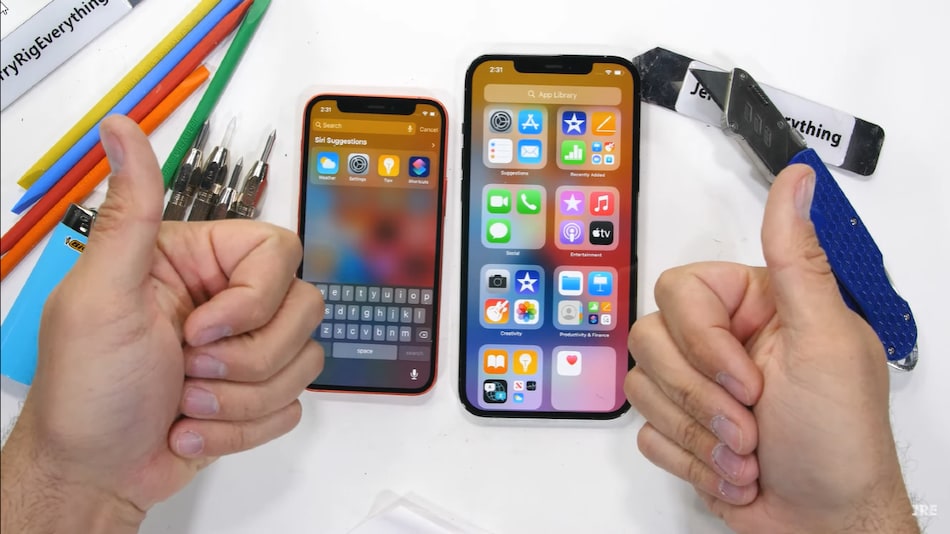 iPhone 12 Pro Max, iPhone 12 mini do not bend in the latest durability test

iPhone 12 Pro Max and iPhone 12 mini passed flame, scratch, and bend tests with flying colours. Youtuber JerryRigEverything got his hands on an early unit of both iPhone 12 Pro Max and iPhone 12 mini and conducted his customary range of durability tests. The two phones aced all the tests with ease. Particularly noteworthy was the flame test, wherein the two iPhones showed no signs of damage even after 50 seconds of being exposed to a small blaze from a lighter.

JerryRigEverything published a video wherein he carries out his usual scratch, bend, and flame tests on iPhone 12 Pro Max and iPhone 12 mini. In his scratch test, it was discovered that the two phones do get scratched at level 6 on Mohs scale, with deeper grooves at level 7. However, these scratches are much less prominent than usual. Apple has put in its new ceramic shield on the display for added protection. It is essentially a special form of glass that has ceramic crystals embedded into the glass matrix. The company claims that this has improved the iPhone's shatter resistance.

iPhone 12 mini was discovered to have an aluminium frame, whereas iPhone 12 Pro Max has a stainless steel frame. The two phones were exposed to a lighter flame for about 50 seconds each, and both managed to survive without any damage to the pixels. This was rather impressive and Zack Nelson of JerryRigEverything suggested that the ceramic crystals could be acting as an insulation layer as well.