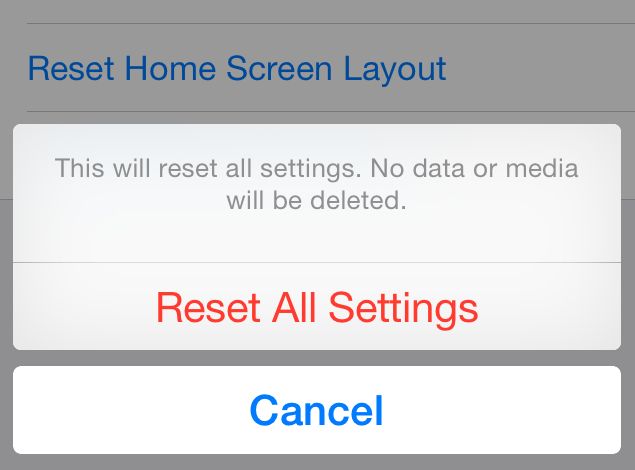 The Reset All Settings option in iOS 8 might have a critical flaw. MacRumors reported that using the option deletes all the iWork documents stored in iCloud Drive, Apple's cloud storage service.

Reset All Settings is an option that resets all user preferences to default, without deleting any user data or media. It is not supposed to delete data stored in iCloud Drive and if MacRumors' report is true for every iOS user, this is a critical bug.

MacRumors quoted a post on its forums in its report. A user wrote, "Because iOS 8 was so sluggish on my iPad 3 I reset all settings (No data or media will be deleted) and sped it up BUT deleted my iWork data! Then promptly synced and deleted it in iCloud. I have public beta of Yosemite so can't roll back via time machine. I have no pre iOS 8 backups in iTunes or iCloud to revert to (well iCloud device backups don't contain cloud documents and I should have iOS 7 backups in iTunes but can't find any). iCloud has no trash like dropbox. They seem gone forever."

MacRumors says that one of its users reported that only data from Apple's iWork apps such as Pages, Numbers and Keynote were wiped, while that from other apps remained in iCloud. As of now, the only way to recover these files appears to be from a locally stored backup or via Time Machine.

The report said some users were told that Apple was working on the issue and that some accounts had been placed in troubleshooting mode in an attempt to recover the data. If this bug is found to be affecting all users, it will be the second instance of a software bug crippling iOS 8. Earlier, Apple's iOS 8.0.1 update had shut off cellular connectivity and Touch ID on iPhone 6 and iPhone 6 Plus. Apple promptly fixed it with the iOS 8.0.2 update, but the bug affected several users in the meantime.

The iOS 8 update for the iPhone 4S is also said to be badly optimised, with complaints of a cramped interface and slow performance.

Before the launch of the new iPhones, some users' iCloud data appeared to have been stolen. Several celebrities' nude photos were leaked online and Apple admitted that these were stolen from their iCloud accounts by pilfering individual accounts rather than breaching the security of the service as a whole. Apple also added another layer of security to iCloud by adding two-step verification to iCloud.