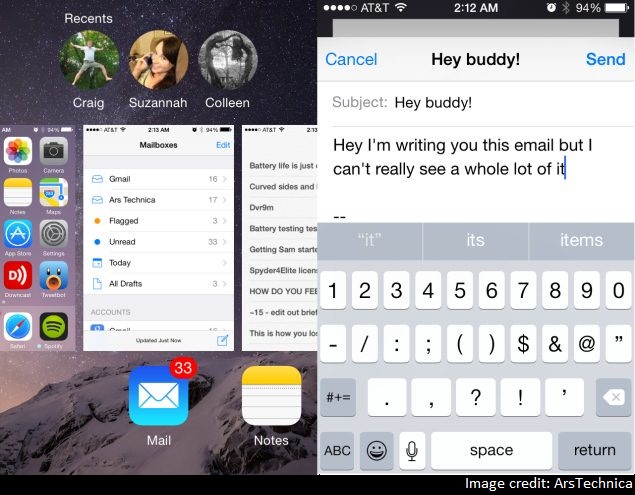 Apple has been generous to include the iPhone 4S in the list of devices to get the latest iOS 8 update, but reportedly there are more issues with the update for the device than the significant improvements users might be upgrading for.

The team over at ArsTechnica installed iOS 8 on the iPhone 4S and found that apps opened up with a little delay in the new OS, although it is "nowhere near as bad as iOS 7 on the iPhone 4."

ArsTechnica also observes that the iPhone 4S is the device with the smallest screen to get the iOS 8 update, resulting in a cramped feel as the OS has been designed for the large screen iPhone 6 and iPhone 6 Plus with features like predictive typing, new Mail sorting options, Notification Center widgets, Spotlight and more. The team notes that only one of two results can be shown with Spotlight suggestions, while Notification Center can fit in a widget or two before users will start scrolling.

Notably, the iPhone 4S is the last device from Apple to have a 3.5-inch display, and it runs on the dated Apple A5 chip, while the latest iPhone 6 and iPhone 6 Plus respectively bear 4.7-inch and 5.5-inch displays while both running on the Apple A8 chip. Apple had launched the iPhone 4S in 2011.

While we are hopeful that Apple will address the issue just like it did with the quick iOS 7.1 update for the iPhone 4 last year, it would have to provide a rework of the UI to prevent the cramped interface on a small screen size.

Let us know if you are also a proud iPhone 4S owner and are facing such issues?