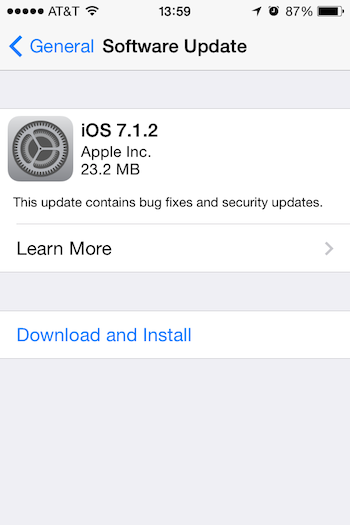 iOS 7.1.2 for iPhone, iPad, and iPod touch is now available as a free download over-the-air on iOS devices, as well as via iTunes.

The update, according to Apple, improves iBeacon connectivity and stability. It also fixes a bug with data transfer for some third-party accessories, including bar code scanners. Finally, the update corrects an issue with data protection class of mail attachments.

As with any Apple OS update, iOS 7.1.2 also contains fixes for a bunch of security issues. The details of these issues can be found on Apple's website.

If you are using an iPhone 4 or later, iPod touch (5th generation) or later, iPad 2 or later, running iOS 5 or later, iOS 7.1.2 should be available as an over-the-air update for your device. Go to Settings > General > Software Update and iOS will automatically check for available updates. According to Apple, available updates download automatically if your device is connected to Wi-Fi and a power source. Tap Download to download the update and after the download has completed tap Install to update your iOS.

If you leave the update to download in the background, once the download has finished you will receive a notification saying an update is available for your device. Tapping Details will take you to Settings > General > Software Update. Tap Install Now to install the iOS update. If you decide to leave the installation for later Settings will display notification badge until the update has been installed.

Alternatively, you can install the update via iTunes by following the instructions at this page.

We strongly recommend you back up your iOS device to iCloud or with iTunes before installing any iOS updates.