iOS 11.3 Beta 2 Provides a Glimpse of How Battery Health Features Will Work 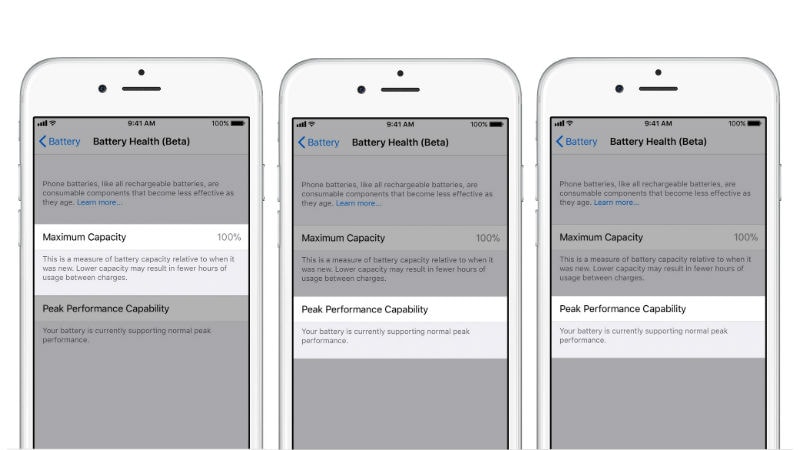 Apple has released the second beta build of iOS 11.3 to developers that brings a bunch of features showing battery health and recommending if an old battery needs to be replaced. The new features come under the battery settings menu and provide users with information on maximum battery capacity and its peak performance capability. These mainly address the concerns specific to the performance throttling that Apple added to fix random shutdowns on older iPhone models. The iPhone maker had announced its battery health-centric features alongside announcing the iOS 11.3 last month.

iOS 11.3 beta 2 shows a Battery Health screen that you can access by going to Settings > Battery. Once accessed, it shows a feature called Maximum Capacity that allows you to see the maximum capacity of your iPhone's battery relative to when it was new. The newer iPhone models will show 100 percent capacity, while it becomes lower as the battery ages. Apple says that a lower battery percent point than the default 100 percent may result in "fewer hours of usage between charges" than what you'll get from a fresh battery.

Alongside the two commonly found conditions, the Peak Performance Capability section on iOS 11.3 beta 2 notifies when you should reach out to an Apple Authorised Service Provider to get the battery serviced. It will show a message that reads, "Your battery's health is significantly degraded. An Apple Authorised Service Provider can replace the battery to restore full performance and capacity."

The battery health related features apply to iPhone 6, iPhone 6 Plus, iPhone 6s, iPhone 6s Plus, iPhone SE, iPhone 7, and iPhone 7 Plus. Thus, if you own the brand new iPhone X or the iPhone 8 or iPhone 8 Plus, you don't need to look for any of the latest features as the newer iPhone models are thus far not impacted.