iOS 10.3 Set to Bring IPL and Other Cricket Scores via Siri, Find My AirPods, and More 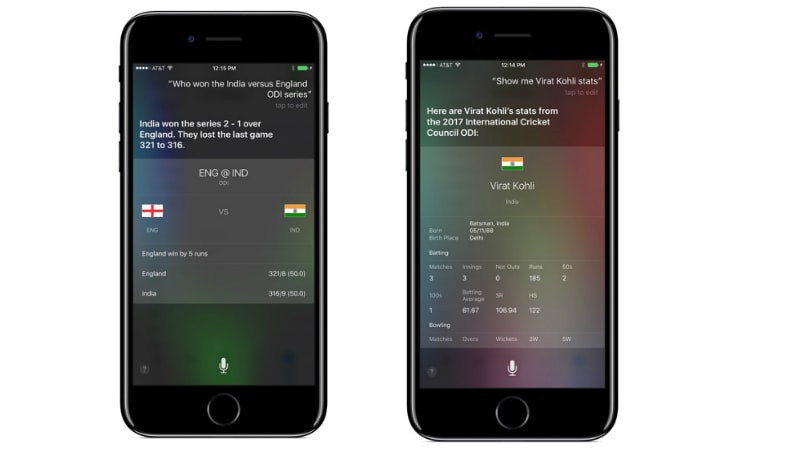 Alongside the commercial release of iOS 10.2.1 to all iPhone and iPad users, Apple also released iOS 10.3 beta 1 to developers. The beta version introduces several useful features, the big highlight being the ability for Siri to show live scores from Indian Premiere League (IPL) and International Cricket Council (ICC) cricket matches, apart from answering other queries. iOS 10.3 beta also brings along the 'Find My AirPods' feature - a much needed addition given the nature of the tiny accessory. Furthermore, Apple has also added an API that allows app developers to ask for a review, and even reply to it - building developer-customer dialogue.

iOS 10.3 beta 1 brings support for AirPods in the Find My iPhone app. This means that you can search for the AirPods from the app, as long as they are within Bluetooth range of any of your iOS devices signed into iCloud. Because of the limited range, it isn't as efficient as Find My iPhone range, but it's still handy if you lose your AirPods somewhere in your house. Within the app, you can look for the pair, or just one earbud, as you prefer. The AirPods will start emitting a loud sound revealing its hiding place, or the map onscreen can also take you to the lost earbud easily.

Find my Android and the Cricket Scores on Siri features seen on iOS 10.3 beta 1

Furthermore, Siri gets the ability to show live cricket scores from matches of the IPL and the ICC. The digital assistant will give you real-time ball-by-ball update of the most popular game format in India, a handy feature for all cricket fans in the country. You can even ask Siri other IPL-related questions like 'What are the 2016 IPL rankings?', 'Who leads the IPL in runs scored?', 'Show me Virat Kohli stats', 'When is the next Cricket match?', and more, and Siri will reply immediately. Match schedules and player rosters can also be checked.

The Settings app also gets a new interface, with your profile taking the top space. The profile menu has your photo, name, and all the important details required for you to glance in one shot. The iCloud setting also introduces a neat graphic to show you your storage space situation.

Apple has also added an API that allows app makers to ask for a review of their app. Users can toggle this feature on/off at a system level (across all apps) if they prefer. Developers can in turn publicly reply to those reviews as well - a very good addition indeed for the app making community.

Apart from this, iOS 10.3 brings the next-generation APFS file system with native encryption, replacing the age-old HFS+ file system. The Podcast app also finally gets a widget, and works just like Apple Music's widget. It plays the latest Podcasts without actually opening the app.

There's also the new iCloud analytics, that lets you share usage and other data of your iCloud account with Apple, if you wish to. CarPlay also gets some love, and now it gives quick access to the last three apps used. As for the interface, Spotlight search sees some improvement, and the animation while opening and closing of apps seems to be slightly tinkered with. 3D Touch on weather icon in Maps gives hourly forecasts, and lets you know if there is any chance of rain or change in weather.