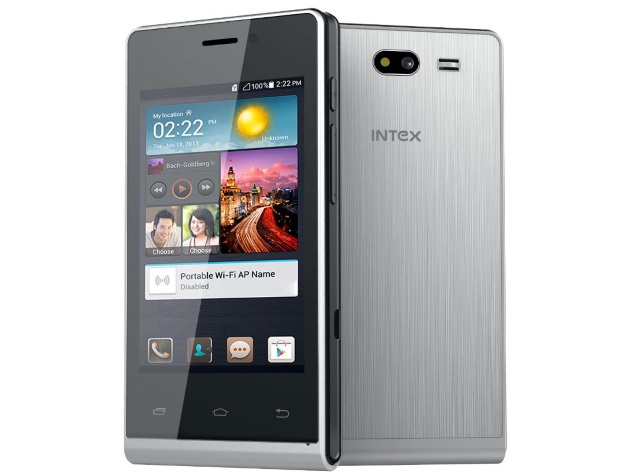 A new Intex budget smartphone, the Aqua V4, has gone on sale in India via an e-commerce website, priced at Rs. 2,699.

The Intex Aqua V4 is a dual-SIM (GSM+GSM) device which runs Android 4.4.2 KitKat out-of-the-box. It has a 3.5-inch (320x480-pixel) HVGA screen and is powered by a 1GHz single-core Spreadtrum (SC7715) processor coupled with 256MB of RAM. It has 512MB of inbuilt storage, which is expandable via microSD card (up to 32GB). It sports a 2-megapixel rear camera with LED flash, while there is a secondary 0.3-megapixel front-facing camera as well.

Notably, the smartphone supports 3G connectivity on one SIM, which can be considered one of its highlights at this price point. Apart from 3G, other connectivity options include GPRS/EDGE, Wi-Fi, Micro-USB, and Bluetooth.

The smartphone packs in a 1,200mAh battery, which, according to the eBay listing, can deliver up to 9 hours of talk time and 180 hours of standby time. The Intex Aqua V4 measures 116.5x61.5x10.95mm and will be available in Dark Grey, Silver Black, Grey Black and Gold Black.

All three new Aqua series smartphones were listed on the company's site with pricing - the Intex Aqua 3G Mini is priced at Rs. 3,370, while both the Aqua T4 and the Aqua T5 are listed at Rs. 3,120.

No One's Seen These Videos, Heard These Songs, or Backed These Projects
One in Six Smartphone Users The Victim of Cyber-Attacks: Study