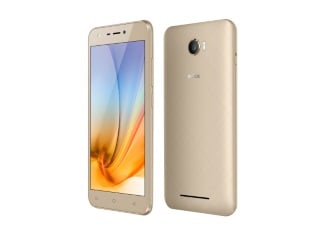 Intex launched its budget-end Aqua 5.5 VR smartphone with VR capabilities last year in October and on Wednesday, it launched the handset's successor, the Aqua 5.5 VR+. The Aqua 5.5 VR+ smartphone has been priced by the company at Rs. 5,799 and will be exclusively available in the country through Flipkart. It is bunded with a VR headset.

In terms of specifications, the dual-SIM Intex Aqua 5.5 VR+ runs Android 7.0 Nougat out-of-the-box and sports a 5.5-inch HD display. The handset is powered by a MediaTek processor clocked at 1.25GHz coupled with 2GB of RAM. In terms of optics, the Intex Aqua 5.5 VR+ comes with an 8-megapixel primary rear camera and a 5-megapixel shooter at front for taking selfies.

The Intex Aqua 5.5 VR+ comes with 16GB of built-in storage, which is further expandable via microSD card (up to 128GB). The connectivity options offered by the smartphone include 4G VoLTE, Wi-Fi, and Bluetooth. The Aqua 5.5 VR+ houses a 2800mAh battery and is available in Champagne colour.

The new Intex smartphone comes preloaded with apps such as QR Code scanner, Xender, Gaana and Vistoso. "With 'Aqua 5.5 VR+', we have added a valuable product to our portfolio and are working towards creating an industry benchmark in terms of affordable phones with high-end features," said Ishita Bansal, Product Head - Mobiles, Intex Technologies, in a statement regarding the launch of the smartphone.

To recall, the Intex Aqua 5.5 VR also sports a 5.5-inch HD (720x1280 pixels) display but packs a 1.2GHz quad-core MediaTek MT6737V/W processor coupled with 1GB of RAM. The smartphone comes with inbuilt storage of 8GB, which is expandable via microSD card (up to 32GB).