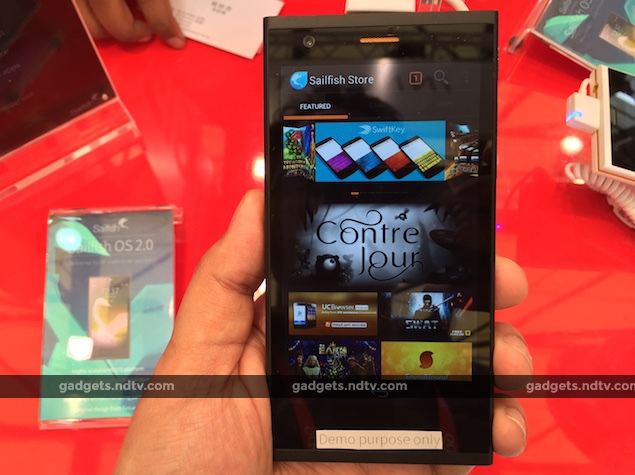 We got excited at the prospect of Intex launching the first Sailfish OS 2.0 powered smartphone at MWC Shanghai, but Jolla and Intex just gave us a big tease instead. At the scheduled press event on Thursday, the two companies announced that the first Sailfish OS 2.0 powered smartphone will indeed be manufactured by Intex, but they aren't ready to unveil it just yet.

Intex clarified that the smartphone on display at MWC Shanghai (pictured above) is a reference design and not the device that will eventually ship, as suggested by a company representative on Wednesday. Intex, which has become the first company in the world to license Sailfish OS 2.0 with Thursday's announcement, expects to release the first smartphone based on the revamped platform in November this year.

Sanjay Kalirona, Head Mobile Business, Intex Technologies said, "We are very excited to be the world's first licensing partner for Sailfish OS and look forward to utilising the great user experience of the next generation Sailfish OS 2.0 in our products. Together with the Sailfish India ecosystem partners we believe that we can provide an exciting new choice for smartphone lovers in India and later globally as well."

Jolla on its part unveiled a new reference design platform that Intex - and it hopes other partners - will build upon. The design is based on Qualcomm 200, 600, and 800 Snapdragon chips to span across various price points, and will support 4G/ LTE.

Antti Saarnio, Executive Chairman of Jolla said, "In our BRICS country strategy we have been proceeding fastest in India, which is one the most important markets in the future of mobile. We have seen a lot of interest among Indian mobile device manufacturers, digital media houses, and operators, and they are all very keen to work with an alternative to the currently dominating mobile operating systems."

Jolla had unveiled Sailfish OS 2.0 at MWC in Barcelona earlier this year. The updated OS brings an improved UI and new software integration capabilities for partners. Swiping left or right from the multi-tasking view in Sailfish OS 2.0 brings up partner spaces, which the company uses to monetise its OS.

Partners - Snapdeal and Times Internet are already on board for the India market - can use these spaces to promote their content with the manufacturer (like Intex) and Jolla potentially getting a slice of this revenue. The real estate is pretty premium considering it's just a swipe away from a frequently accessed screen, but it will be interesting to see if people actually swipe into these screens or learn to tune them out if they start to look too much like advertisements.

Disclosure: The correspondent has travelled to MWC Shanghai at Intex's expense.