Intel Working on a 3-Display Foldable Phone That Opens Into a Tablet, Patent Suggests 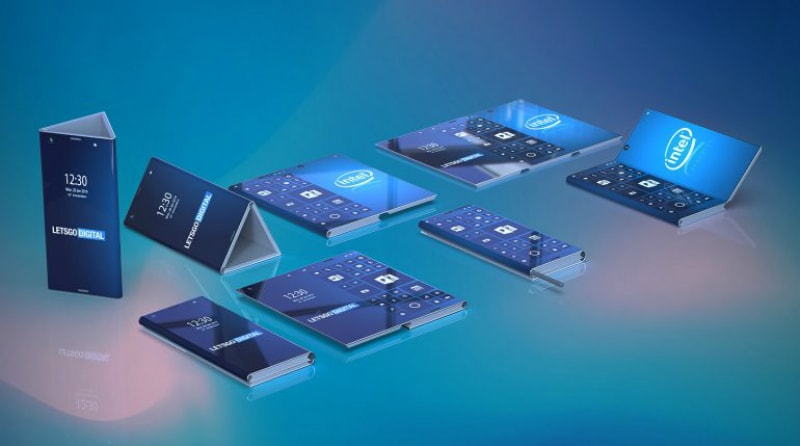 Intel is working on a foldable device

Last year, the trend of display notches took the forefront, and 2019 looks to be the year of foldable phones. Samsung, Xiaomi, Huawei, LG, and many other OEMs are reported to be working on bringing foldable devices this year and it looks like Intel is building a foldable smartphone as well. A patent spotted on World Intellectual Property Office (WIPO) and the United States Patent and Trademark Office (USPTO) that was published in 2017 shows us an Intel smartphone that opens up into a large tablet-sized screen that is a combination of three displays.

LetsGoDigital spotted this patent application published by Intel Corporation, titled 'Electronic device with foldable display panels'. The patent suggests that when the device is fully folded, it can be operated as a smartphone. It comes with a full-screen display with no bezels whatsoever, and the cameras, sensors and the receiver are all placed underneath the display. This smartphone can be unfolded two times to open up into a large tablet.

Because it comes in two folds, the smartphone is a bit thicker than the conventional ones in the market currently. The tablet consists of three display parts when unfolded, and each section comes with two cameras each i.e. six cameras in total. It also comes with a stylus pen that slides into the dents formed by the folds, and is possibly held into place magnetically.

The report suggests that it does not seem likely that this advanced foldable smartphone / tablet will hit the market anytime soon, but it does show that companies like Intel are also investing in the foldable future.