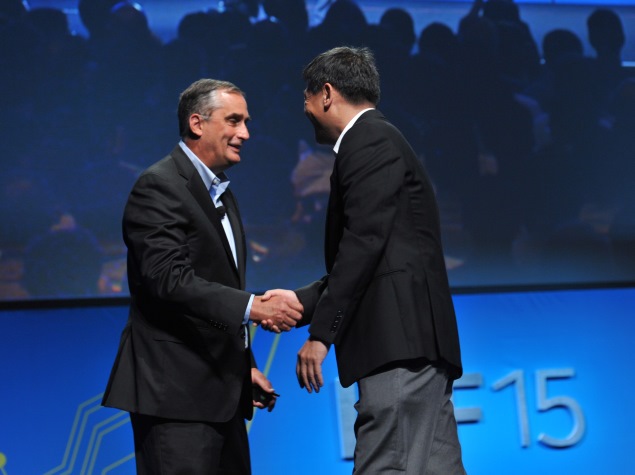 With the Intel Developer Forum (IDF) 2015 kicking off in Shenzhen on Tuesday, CEO Brian Krzanich showed off Intel's latest RealSense 3D camera that is even smaller and slimmer than the previous version, and is now capable of being used in smartphones.

There are not many details disclosed by the company as yet, though Krzanich (via Engadget) says the new Intel RealSense 3D camera has a longer detection range and a lower thermal output. Krzanich also showcased a 6-inch smartphone prototype that had Intel RealSense camera fitted in, though he didn't demonstrate anything from it on stage.

To recall, Intel had first unveiled the RealSense 3D camera back at CES last year, and said it can be integrated into tablets and enable users to produce and manipulate three-dimensional images. One of the first tablets to sport it was the Dell Venue 8 7000 Series tablet, which bore a RealSense Snapshot Depth Camera, and was launched back in September.

The chipmaker also announced that the new version of its Atom processors meant for IoT (Internet of things) devices, called the Intel Atom x3 (codenamed 'SoFIA'), is being used by multiple original design manufacturers (ODMs) in designing IoT products which are expected hit markets later this quarter.

The new Atom x3 lineup was first introduced last month at MWC 2015 along with Atom x5 and Atom x7. At IDF 2015 on Tuesday, the company showcased the first live demonstration of the Intel Atom x3 processor in a smartphone, supporting LTE-TDD connectivity over China Mobile network. Devices running Atom x3 are expected to ship in the second half of this year, says Intel.

Last month, Intel said that the new Atom x3 lineup will include processors with integrated 3G or LTE modems, while the Atom x5 and Atom x7 will need to be paired with discrete modems just as existing processors are.

The Atom x3 processor are based on Intel's SoFIA platform, which was developed after the company acquired the wireless arm of Infineon Technologies. SoFIA (Smart or Feature phone with Intel Architecture) is the company's integrated solution for emerging markets and low-cost devices.