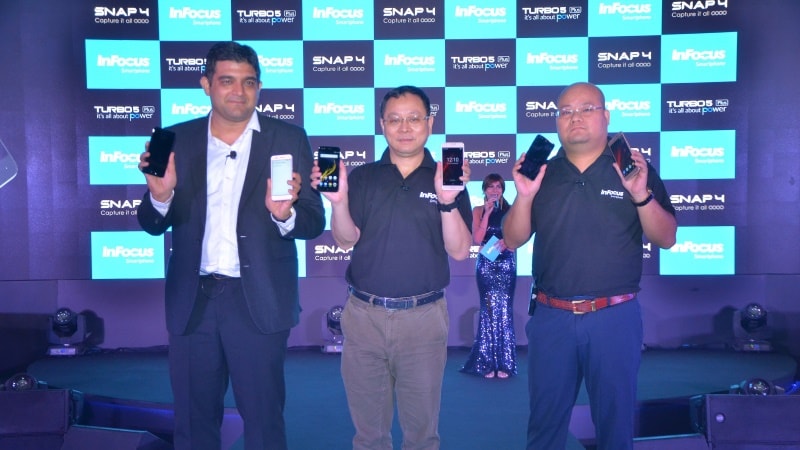 InFocus on Wednesday launched two new smartphones to strengthen its smartphone portfolio in India. These are the Turbo 5 Plus - which is the successor of Turbo 5 launched in June - and the all-new Snap 4. As its prime focus, the Turbo 5 Plus promises big on its battery life as one of its highlighted features while the Snap 4 touts its dual front cameras as its highlights. The InFocus Turbo 5 Plus price is Rs. 8,999, and will be available exclusively on Amazon India from midnight on September 21, while the InFocus Snap 4 will also be exclusively sold on Amazon India at Rs. 11,999 starting September 26, 12pm onward.

The InFocus Snap 4 is a photography-focused smartphone that boasts of a dual rear camera setup of 80-degree 13-megapixel and 120-degree wide-angle 8-megapixel configuration. Both the cameras work in collaboration to produce a Bokeh effect for portraits. There is also a dual LED-flash module located next to the cameras. Coming to the front side, the smartphone features a dual 8-megapixel camera setup, differentiating the Snap 4 apart from its competitors, with the background blur mode. The front cameras also come with a customised beautification mode for better selfies, the company says.

Apart from the aforementioned specifications, the InFocus Snap 4 runs on Android 7.0 Nougat and supports dual-SIM cards. The smartphone has a metal unibody design with a 7.9mm thickness and 164 gram weight. It is powered by a 64-bit octa-core MediaTek MT6750N processor (4 Cortex-A53 cores clocked at 1.5GHz + 4 other unspecified cores clocked at 1GHz), paired with 4GB of RAM and Mali-T860 GPU. The Snap 4 packs a 5.2-inch HD (720x1280 pixels) OnCell IPS display. In terms of storage, the smartphone has 64GB of inbuilt storage that can also be expanded further via microSD card. It houses a 3000mAh battery under-the-hood and embeds a fingerprint scanner on the home button at the front.

Moving to the successor to the previously introduced Turbo 5, the InFocus Turbo 5 Plus bears similarity in terms of the cameras. The smartphone has a dual rear camera setup of 13-megapixel sensor and 5-megapixel sensor with an LED flash. On the front, however, it has a single 5-megapixel camera. Besides this, the smartphone runs Android 7.0 Nougat out-of-the-box and is a dual-SIM smartphone. It is powered by a octa-core MediaTek MT6750 SoC coupled with 3GB of RAM. It has a HD (720x1280 pixels) 5.5-inch IPS display. On the storage front, it has 32GB of inbuilt storage with support for expandable storage via microSD card. The smartphone comes with a massive 4950mAh battery that the company claims can last up to 34 days on standby.