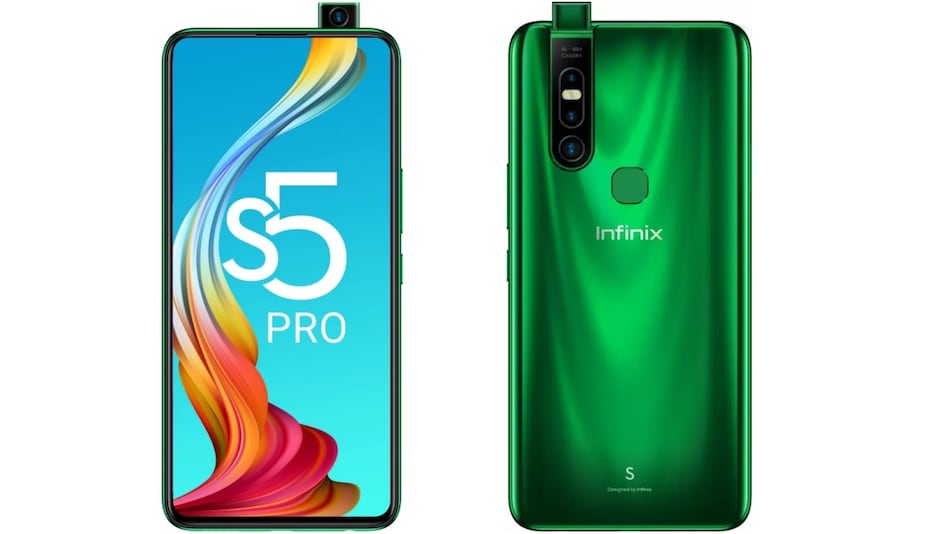 Infinix S5 Pro has been launched in India, and it's one of the most affordable smartphones packing a pop-up selfie camera. The Infinix S5 Pro runs Android 10 Pro with the XOS 6.0 skin on top. Design-wise, the smartphone seems to take some inspiration from the Vivo V15 that was launched last year, and sports a 3D glass finish on the rear panel. The Infinix S5 Pro comes with a triple rear camera setup that is headlined by a 48-megapixel main camera. Infinix says that its new offering also provides DTS-HD surround sound output and can deliver a talk time of 14 hours on a single charge.

As far as price goes, Infinix S5 Pro will set buyers back by Rs. 9,999 and will go on sale starting March 13 from Flipkart. The phone comes in two colour options – Forest Green and Violet.

Infinix S5 Pro packs a 48-megapixel camera at the back with an f/1.79 aperture, and supports features such as portrait mode, night mode, and HDR to name a few. It is assisted by a 2-megapixel portrait camera and a dedicated low-light sensor. Selfies are handled by a 16-megapixel camera with an f/2.0 lens housed in a pop-up module. The front camera supports features such as AI portrait and 3D face beauty mode, while the pop-up module is claimed to be dust and splash-proof.

The Infinix S5 Pro offers 64GB of onboard storage that can be expanded further via a microSD card (up to 256GB) that fits in a dedicated slot. It comes equipped with a 4,000mAh battery that is claimed to deliver 28 hours of music playback on a single charge. Connectivity options on the phone include 4G LTE, Wi-Fi 802.11 a/b/g/n, Bluetooth 5.0, and GPS. The latest Infinix phone weighs 162.5x76.88x8.95mm and weighs 194 grams.