It is unclear when Infinix will launch the new Infinix Hot 9 in India and other countries. 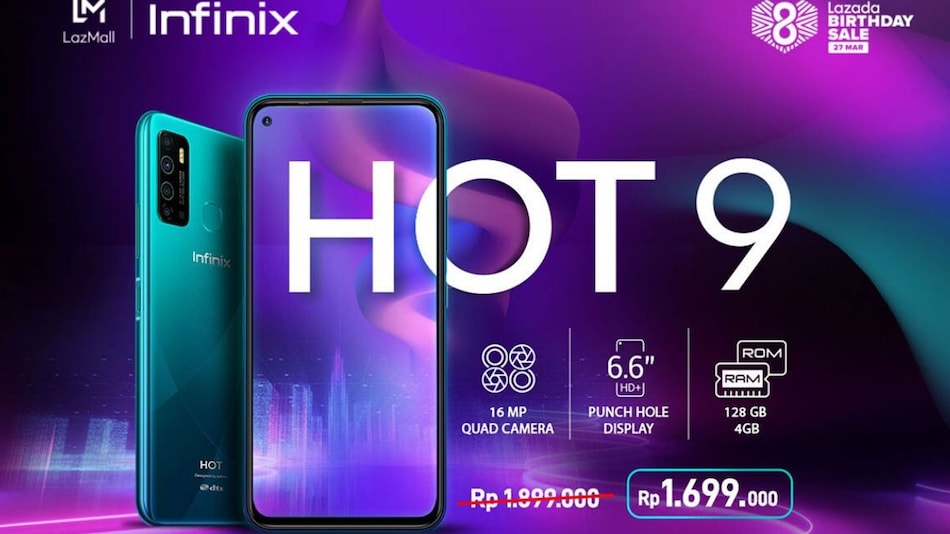 Infinix Hot 9 smartphone on Monday made its debut in Indonesia. The budget smartphone succeeds the Infinix Hot 8 that was launched in 2019 and comes with major upgrades in terms of the processor and the rear cameras. Infinix Hot 9 is further available in Matte Black, Cyan, Violet, and Light Blue colour options and a single storage variant. Since the Infinix Hot 9 is currently available in Indonesia, it is unclear when the company will start rolling out the smartphone on a global scale. We can also expect the latest smartphone by Infinix to come to India, as its predecessor also arrived in the country in September 2019.

The Infinix Hot 9 smartphone will be available for pre-booking in Indonesia starting March 27. The single 4GB + 128GB variant of the phone is priced at Rp 1,699,000 (roughly Rs. 7,870). As earlier mentioned, the Infinix Hot 9 comes in four colour options.

The dual-SIM Infinix Hot 9 smartphone features a 6.6-inch IPS LCD display that offers HD+ resolution. The back panel of the smartphone is seemingly made from a polycarbonate material and in comparison to its predecessor the Infinix Hot 8, the latest Infinix Hot 9 comes with an upgraded processor. The newly launched smartphone is powered by 1.8GHz MediaTek Helio A25 octa-core SoC, paired with 4GB of RAM.

In terms of the cameras, the hole-punch on the front panel houses an 8-megapixel selfie camera with AI features. On the rear panel, there's a vertically stacked quad camera setup which includes an AI lens with auto-focus qualities. The quad camera setup further houses a 16-megapixel primary sensor, and two 2-megapixel shooters.

The phone runs on the Android 10-based XOS 6.0 and packs 5000mAh battery that supports 10W fast charging. There's also a fingerprint scanner right next to the rear camera setup. Additionally, the internal storage capacity of the Infinix Hot 9 can be expanded up to 256GB via a microSD card.

Other features on the newly launched smartphone by Infinix include Face Unlock, AR Emoji, AR stickers, and DTS Audio Technology.